A a semi-porous material called Flexi-Pave absorbs 3,000 gallons of water per hour.

The iconic Old Faithful geyser at Yellowstone National Park spouts an impressive 3,700 to 8,400 gallons of water every hour. Perhaps more striking is the geothermal network below it, which supports nearly two-thirds of the entire Earth's geysers.

To preserve that network for as long as possible, the park is replacing thousands of square feet of crumbling, petroleum-based asphalt sidewalks with a semi-porous material called Flexi-Pave. Conventional sidewalks promote rivers of runoff that not only wash away soil and cause erosion, but also leach toxins into the ground.

Flexi-Pave is different. It absorbs 3,000 gallons of water per hour, which reduces runoff and returns the rainwater to the ground in a natural pattern, where it can replenish the geyser basin below.

Wait, it gets better. The material is made from a mix of used tires as well as bits of stone. The aggregate is held together with a polymer binder invented by Flexi-Pave manufacturer KBI, a partner along with Michelin on the project. And because the material becomes inert after its manufactured, no toxins leach into the soil as the rainwater flows through it.

KBI just paved a 4,160-square-foot path near Old Faithful, the second phase of the Old Faithful Walkway Project. For this section, they ground up more than 1,500 used Michelin tires. Back in Sept. 2015, KBI repurposed 900 end-of-life tires.

WATCH VIDEO: Exploring the Wild Side of Yellowstone

"Helping to create a next-generation trail system in Yellowstone National Park is very gratifying," Kevin Bagnall, CEO and founder of KBI said in a press statement. "Flexi-Pave not only provides an environmentally friendly solution for the Old Faithful area, it prevents thousands of old tires from ending up in a landfill or being burned for fuel."

Watch the video to see KBI's crew laying down the Flexi-Pave in America's oldest national park. 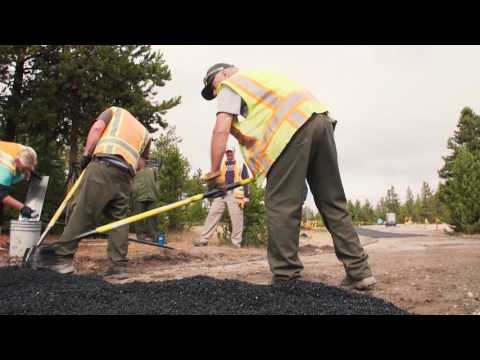