Go toward the light!

That's the imperative genetically programmed into a new class of biological robots - or biobots - announced today by researchers with the University of Illinois. The new technique allows for the creation of small insect-like biobots that turn and walk on their own toward nearby light stimulus.

It works like this: The miniature biobots are powered by rings of muscle tissue grown from a mouse cell line. Genetically engineered to respond to certain wavelengths, the muscle cells contract when stimulated by light - a process known as optogenetics.

The muscle tissue is grown into modular ring shapes - similar to tiny rubber bands - which are then looped around 3D-printed flexible "backbones." The backbones range from 7 millimeters to 2 centimeters in length. Because the muscle rings are modular, they can be swapped out or combined to create biobots for a variety of applications.

"This is a much more flexible design," says lead researcher Rashid Bashir in press materials accompanying the announcement. "With the rings, we can connect any two joints or hinges on the 3D-printed skeleton. We can have multiple legs and multiple rings. With the light, we can control which direction things move. People can now use this to build higher-order systems."

Fukushima Robots Have Died From Radiation

The researchers experimented with a number of different sizes and shapes to find the most efficient system for biobot locomotion, which turns out to be something similar to how an inchworm moves. They also exercised the muscle rings daily, using flashing lights to trigger contractions, making the biobots stronger.

The National Science Foundation has posted a video of the biobots in action, in which they jump and twitch to strobe lights in the lab. It kind of has a disco vibe, actually. Check it out below.

The research was published this week in the Proceedings of the National Academy of Sciences. 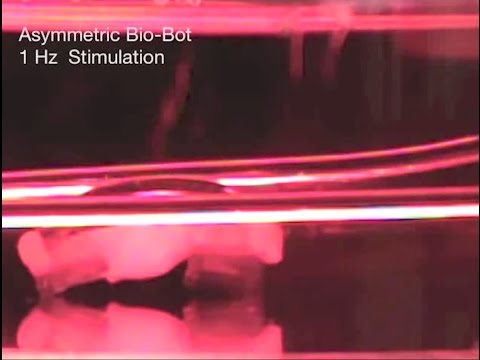 The fast and maneuverable Naro-Tartaruga will have pressure, temperature, water leakage and water flow sensors, along with gyros, GPS and a compass to navigate.