Click around a 360-degree view of live surgical operation on your PC, mobile device or VR headset. Continue reading →

If you're looking for a different way to spend an afternoon this week, why not peek in on a cancer operation live streaming from a British surgical center? Seriously, what else do you have planned?

London surgeon Shafi Ahmed will perform the operation on Thursday, April 14, as part of a program designed to educate medical students - and the public at large - about surgical training. The procedure will be filmed by multiple cameras using cutting-edge virtual reality technology.

If you happen to have a VR headset like the Oculus Rift or Samsung Gear, you can get the full virtual-reality experience, including a 360-degree view from the central camera positioned above the operating table. You can also get a cheap-seats VR view of the operation using your smartphone, the Google Cardboard device, and this app.

Or you can simply visit the Medical Realities website for a browser-based live video of the operation. You'll still get the 360-degree view off the central camera - just click and drag around the image to look around.

Billed as the world's first live virtual reality surgical operation, the broadcast is powered by Mativision cameras, which use multiple lenses to capture panoramic views. The different camera angles are stitched together in real time and sent out in the live video feed.

In this case, there will a short "tape delay" in case anything unexpected occurs during the, you know, life-or-death cancer surgery. Mativision cameras are typically used to live stream panoramic views of music concerts and other live events.

Dr. Ahmed, a consultant surgeon at St Bartholomew's hospital in London, performed a similar operation in 2014, live-streaming the procedure using Google Glass. That operation was viewed by around 13,000 surgical students and healthcare professionals in more than 100 countries.

Thursday's operation will be the first time that virtual reality technology is incorporated into the mix.

Virtually Teleport Yourself To A Friend's Living Room

The patient, by the way, is a 70-year-old British man who apparently is totally cool with the situation.

"He is really up for it," Ahmed told U.K. newspaper The Guardian. "I've gone through things with him and he genuinely is really interested in the project and wants to help."

Click over to the event site for developing details on when the excitement will commence. Meanwhile, here's a demo video on the Virtual Surgeon system. 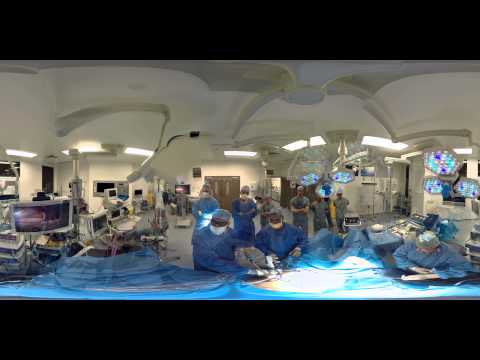