Billing itself as the world's first 3D-printing restaurant, the traveling event known as Food Ink is hoping to bring a kind of fast-forward dining experience to major cities all over the world. The pop-up gastropub promises gourmet 3D-printed food made into artistic "culinary sculptures" presented in a series of high-tech, nine-course meals.

The idea of 3D-printed food isn't new, of course, but the Food Ink team is surely taking it to new levels of hype. Check out the promotional video below for a sense of the project's cranked-to-11, future-glam elan. 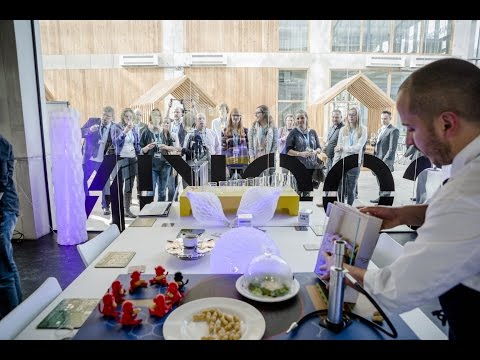 The food will be served up by way of portable 3-D printers operated by a team of gourmet chefs working from their own original recipes. Anything that can be turned into an edible paste -- hummus, cheese, pizza dough, chocolate -- can potentially be routed through the extruders to create new dishes. Original foodstuffs are created layer-by-layer, and the 3D-printed fare will be combined with side dishes and garnishes prepared the old-fashioned (non-printed) way.

The 3-D printing theme extends beyond food. Much of the décor -- even the stools guests sit on -- will be 3D-printed creations. The Food Ink website also hints at some kind of augmented reality component to the events, but it's not clear what those are exactly.

There's a good deal of P.T. Barnum in all this, no doubt. From the promotional materials:

Conceived and executed by a multi-talented international team, Food Ink brings together Architects, Artists, Chefs, Designers, Engineers, Futurists, Industrials, Inventors and Technologists. We have devoted our knowledge, expertise and creativity to ensure that this revolutionary vision becomes a present experience. As there is nothing like the Future, we are investigating emerging technologies with passion and insatiable curiosity.

Ask nicely and the gourmet chefs might just extrude you up something special. Hmm, doesn't have quite the same ring, does it? Anyway, you can get more details -- and make reservations -- at the Food Ink site.