For the first time, the mass of a binary pulsar pair has been precisely measured, but it was a race against time before the extreme gravitational warping of spacetime caused one of the dense objects to blip out of view.

For the first time, the mass of a binary pulsar pair has been precisely measured, but it was a race against time before the extreme gravitational warping of spacetime caused one of the dense objects to blip out of view.

Pulsars are rapidly-spinning neutron stars that generate powerful beams of radiation from their poles. Neutron stars are the stellar husks of long-dead stars that ran out of hydrogen fuel and collapsed under gravity to create a mass of degenerate matter.

VIDEO: What Would Happen if You Fell into a Black Hole?

As some neutron stars spin, radiation is generated, particularly in radio wave wavelengths, sweeping past Earth appearing as a flash like a lighthouse. These flashes correspond to the pulsar's rotational period and they are known to be the most precise timekeepers in the Cosmos.

Few binary pulsars have been discovered however, so when astronomers found the pulsar system PSR J1906+0746 (or simply J1906) they knew they had something special.

One of the binary pair could be seen, flashing every 144 milliseconds, as its axis of rotation was aligned just right to direct its beam of radio waves toward Earth. Its binary partner, however, is dark, suggesting that if it is indeed a pulsar, its collimated beam is pointed elsewhere. The visible pulsar orbits its binary partner every 4 hours.

The study, carried out by an international team of astronomers, is published in The Astrophysical Journal and was presented at the 225th meeting of the American Astronomical Society in Seattle on Jan. 8.

ANALYSIS: ‘Transformer' Pulsar is More Than Meets the Eye

Since its discovery in 2004 by the Aricebo Observatory, the world's most sensitive radio antenna located in Puerto Rico, the system has been continuously studied by other powerful observatories - an impressive billion rotations were recorded over a 5 year period. With this wealth of data, astronomers quickly realized that the extreme gravitational environment surrounding the binary pair would soon cause the visible pulsar to vanish.

"By precisely tracking the motion of the pulsar, we were able to measure the gravitational interaction between the two highly compact stars with extreme accuracy," said co-author Ingrid Stairs, of The University of British Columbia, Canada, in a press release. "These two stars each weigh more than the Sun, but are still over 100 times closer together than the Earth is to the Sun. The resulting extreme gravity causes many remarkable effects."

J1906 is a "relativistic binary" where, as the name suggests, Einstein's general theory of relativity reigns supreme. As the binary system is so compact and massive, like a lead ball weighing down a rubber sheet, spacetime will warp. As the visible pulsar orbits within this spacetime "well", its spin axis follows the curvature of spacetime. Over time, this spacetime warping causes the spin axis to precess - or wobble like a spinning top. This wobbling is known as "geodetic precession."

NEWS: Extreme Pulsar System is ‘One in a Billion'

This curved spacetime caused approximately one part in a million of the pulsar's orbit to be "lost" per 4 hour orbit, roughly translating to a 2.2 degree change in the orientation of the pulsar's spin axis per Earth year. So with this wealth of data in mind, astronomers realized that the pulsar's radio signal would soon point away from Earth and the system would disappear. And sure enough, it disappeared as predicted, but not before the binary pair's masses could be determined.

"Through the effects of the immense mutual gravitational pull, the spin axis of the pulsar has now wobbled so much that the beams no longer hit Earth," said lead researcher Joeri van Leeuwen, of the Netherlands Institute for Radio Astronomy ASTRON, and University of Amsterdam, The Netherlands. "The pulsar is now all but invisible to even the largest telescopes on Earth. This is the first time such a young pulsar has disappeared through precession.

Although it has disappeared from our view, the pulsar will continue in its perpetual wobble and its radio signal will eventually reappear. But we'll have to wait a while - van Leeuwen thinks that it will be another 160 years until we see J1906 flash again.

Watch the following video for a handy animation explaining how geodesic precession works: 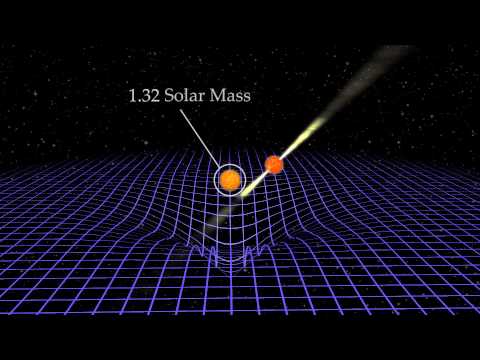 Artist's impression of a pulsar, including the extreme magnetic field surrounding the dense stellar object.