This futuristic polymer material can stretch to 50 times its original length, and then knit itself back together when it breaks.

Along with an entire generation of comic book fans, Chao Wang grew up following the exploits of Wolverine, a.k.a Logan, the razor-clawed mutant with uncanny healing powers.

Now an assistant professor of chemistry at University of Califormia, Riverside, Wang recently paid tribute to his childhood hero, in a chemical engineering sort of way.

Wang and a group of collaborators have developed a transparent and stretchable material that could give future robots the ability to heal rapidly, similar to Wolverine's handy superpower. According to the research team, the space-age material could power artificial muscles that mend themselves after injury or normal wear-and-tear.

The key to the material's self-healing properties? Electricity. Researchers say that the artificial skin represents the first time scientists have created an ionic conductor that's stretchable, transparent and able to heal itself. Previous materials have incorporated self-healing polymers, but were limited by troublesome electrochemical reactions that diminished performance.

Here's a time-lapse video of the healing properties in action: 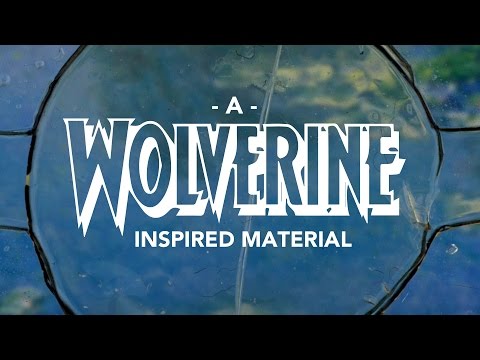 It gets technical, but essentially the team found a way around the problem by throwing charged ions into the mix. As a result, the material can function as an artificial muscle - or dielectric elastomer actuator - that contracts or expands when triggered by voltage.

And the stuff can really expand. The rubber-like material can stretch out to 50 times its original length, evoking images of another comic book hero. Should the material tear or break, the two edges will reattach on their own, knitting together within 24 hours at room temperature.

Tim Morrissey, Ph.D. student in mechanical engineering with the University of Colorado, Boulder, was one of the researchers who worked on the project.

"Human skin can feel and sense a variety of different stimuli such as pressure, heat, and pain," Morrissey said. "Our material can also respond to many of these stimuli. The material could be put in high wear applications, such as hands or outer skin, and perform different sensing tasks. If the material receives modest cuts or damage, the material can heal and continue to sense just like a human's skin."

Indeed, the research team ran experiments in which the new material reacted just like organic muscle tissue, moving when triggered by electric stimulation. They also showed the material mimicking the natural process of wound healing. After being lacerated, the material healed itself without any external stimuli and eventually returned to the same level of performance.

"With our material, we can construct simple systems that behave quite similarly to real muscles," Morrissey said. "Our device expands when it receives a signal. This expansion is the building block for soft muscles on next generation robots."

With further tweaks, the self-healing material has other potential applications beyond robot muscles, researchers say. The ionic conductivity properties could extend the lifetime of lithium ion batteries, for instance. As a kind of synthetic skin or tissue, the material might have uses in the medical field, too.

In press materials issued with the research, co-author Christoph Keplinger, assistant professor at the University of Colorado, Boulder, pointed out still another possible use for the versatile stuff. Evidently, previous iterations of the material, without the self-healing abilities, have been used to make transparent loudspeakers. Didn't see that one coming.

The research was published this week in the journal Advanced Materials.