An active volcano bubbling with hot lava and spewing sulfuric smoke might sound like a nightmare to some, but it turned out to be a dream come true for Italian wingsuit flier Roberta Mancino.

In March she visited the active Villarrica volcano in Chile by helicopter and then stepped off the edge. 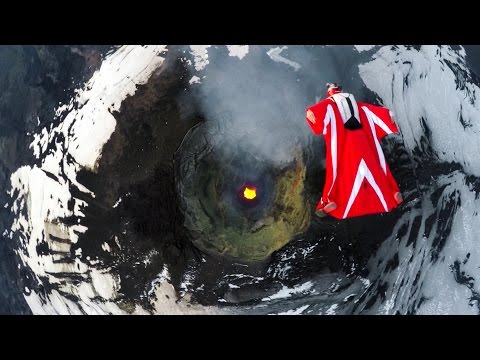 As she prepared for the jump, Mancino donned protective gear underneath her wingsuit. She also put on goggles, but no face mask. That surprised me because sulfur-infused smoke is pouring out of Villarrica's crater. Heck, I wouldn't even want to be on the ground without supplemental air.

RELATED: Wingsuit BASE Jumping: 7 Coolest Videos of All Time

Mancino didn't look too bothered by it, though, as she and her crew soared directly over the snowcapped volcano. Cameras captured close-ups of the roiling lava, the air overhead shimmering from the heat. Mancino headed right through the smoke, released her parachute, and landed on rocky terrain away from the crater.

After all that, she let out a relieved-sounding "Wooo!" when back on the ground, soot lining her face in the areas around her goggles.

This definitely wasn't some fly-by-night thing -- no pun intended. Mancino spent years training for this, according to GoPro's video description of the flight. Originally from Italy, she's an experienced BASE jumper, wingsuit flier, and skydiver. Mancino has a bunch of flying awards and records under her belt, too. And you might recognize her from extensive modeling work.

Back in 2010 she said one of her dreams was to BASE jump off the Burj Khalifa skyscraper in Dubai. Last year she went to Dubai and spent a few days jumping from the Princess Tower (video), which included calmly kissing her boyfriend in mid-air.