NASA's Jupiter mission is about to buzz Earth for a valuable gravity assist for its epic journey to the gas giant -- will the mysterious "flyby anomaly" strike again? Continue reading →

Today, at 3:21 pm ET (12:21 pm PT), NASA's Jupiter mission Juno will make closest approach with Earth as it carries out a valuable Earth flyby so it can pick up speed and continue its Jovian odyssey. Not only will mission scientists be keen to wave the spacecraft goodbye, they will also be carefully monitoring its speed, on the lookout for a strange anomaly that has foxed science since 1990.

Launched in August 2011, the Juno spacecraft hitched a ride on an Atlas V rocket from Cape Canaveral, Fla. Though powerful, that rocket didn't have the oomph to propel Juno directly to Jupiter. So, using some clever orbital mechanics, the spacecraft has zoomed around the sun for the last two years and has ended up where it started. Juno is currently careening toward our planet, setting itself up for a flyby that will take it only 347 miles (558 kilometers) from the Earth's surface. Once complete, the spacecraft will have used Earth's gravitational field as a slingshot, accelerating its speed from 78,000 mph (126,000 km/h) to 87,000 mph (140,000 km/h) in the direction of its final destination, Jupiter.

Apart from being a necessary speed assist, today is also a valuable science opportunity. ESA radio tracking observatories in Australia and Argentina will be closely measuring radio signals from the spacecraft, watching for any strange variations in frequency. Spacecraft using the gravitational slingshot in the past have presented what is known as a "flyby anomaly" where the vehicle mysteriously speeds up (or slows down) more than predicted by scientists. Often, the anomaly is small, but sometimes - particularly in the case of NASA's NEAR asteroid craft in January 1998, which had an additional mystery boost of 13 millimeters/second - the anomaly can be pretty significant.

"Frustratingly, no anomaly was seen during Rosetta's subsequent Earth flybys in 2007 and 2011. This is a real cosmic mystery that no one has yet figured out."

Watch a cool animation of the flyby: 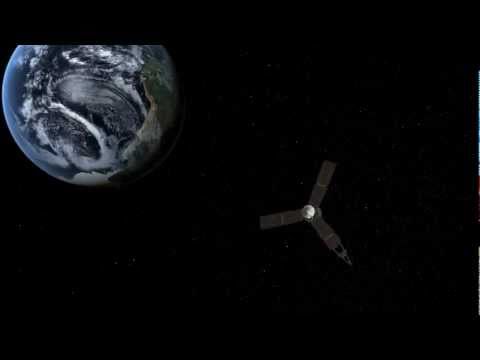 Juno will be in constant radio contact with the ground during the flyby. Should the craft mysteriously speed up or slow down, the anomaly will be picked up as an unpredicted shift in radio frequency. The speed of Juno's blistering flyby presents a challenge to radio antennae, however.

"This makes tracking Juno technically very challenging, but it's how the scientific process works. Gathering more data that can be analysed by experts is critical if we are ever to solve this perplexing mystery."

After using the Earth as an accelerator service, the 3.5 ton spacecraft will be flung into interplanetary space to continue its trek to Jupiter. Once arrived in 2016, the solar-powered spacecraft will orbit the gas giant for a year, studying the massive world's magnetic field, radiation belts and fascinating atmosphere. In doing so, a better understanding of Jupiter's interior may be gained, helping us understand how the planets, including Earth, evolved.

On August 4, the much-anticipated "Wonders of the Solar System" documentary will premier on the Science Channel.

Presenter and physicist Prof. Brian Cox will show you the hidden mysteries of our interplanetary neighborhood, as well as breathtaking sights of the planets, moons and the sun. Cox will also examine some of Earth's extreme environments to see how life has adapted, perhaps helping us understand whether life can exist elsewhere in our solar system. To provide a taster of what you can expect from "Wonders," Discovery News has gathered some facts, figures and the best images of our solar system to assemble a special Wide Angle supporting this groundbreaking documentary. Let's begin, in the orbit of the solar system's biggest planet, Jupiter...

Welcome to Jupiter, the solar system's biggest planet and host to more than 63 peculiar moons -- a steady contender for moons compared to satellite-strewn Saturn. From sulfur-spewing furnaces to ice-encrusted oceans, these Jovian satellites are anything but normal! Browse through 10 of our favorites here. If you're looking for a fiery, volcanic spectacle, head to Io, the innermost of Jupiter's "big four" moons. Jupiter's gravity pulls at Io so strongly that the land has tides of up to 300 feet (100 meters). This gravitational tug-of-war produces scorching heat and raises more volcanic activity here than anywhere else in the solar system. Io has a sulfurous surface, and its volcanoes spew silicate magma, causing the hellish moon's surface look like a pizza.

While it doesn't look like much in this image (the highest-resolution available!), Metis is Jupiter's closest companion -- for now. It's orbiting the gas giant at a distance of just 75,500 miles (128,000 kilometers) and moving faster than Jupiter spins. Metis is so close to Jupiter's surface, in fact, that it will gradually succumb to the planet's gravity and plunge into its churning clouds. This same principle applies to man-made satellites orbiting the Earth; if their orbit is too low, they'll eventually fall.

Like Metis, Adrastea is on its way down, eventually: Its orbit is just 1,000 kilometers (621 miles) outside of its fellow doomed moon. The two bodies probably provide lots of the material making up Jupiter's main ring, shown in this Galileo spacecraft image. Adrastea is also tiny at a wee 12 miles (20 kilometers) in diameter.

If Ganymede orbited the sun instead of Jupiter, it would be a planet of its own -- it's even bigger than Mercury. Its interior is made from layers surrounding a rocky core, and its surface is covered in water ice. Although Ganymede doesn't have much of an atmosphere, it does have some ozone gas near its surface. This gas comes from charged particles in Jupiter's magnetic field smacking into the moon's icy crust.

We're not entirely sure what Themisto looks like, but scientists know it one odd little satellite. Unlike most other moons, Themisto is oblong and doesn't fit into the traditional groups of Jovian moons. Because this body is so small -- just 5 miles (8 kilometers) in diameter -- astronomers in 2000 confused it for a new object when it was originally found in 1975. Shown here is a speculative illustration of how the irregular moon might be shaped.

Along with Io, Ganymede, and Europa (which is yet to come in this slide show), Callisto is one of the four Galilean satellites. These are the moons of Jupiter that Galileo discovered while looking through a telescope in 1610. Callisto is about the same size as Mercury, and it's a heavily cratered moon that has almost no geological activity. Callisto's surface may also be one of the oldest landscapes in the solar system, including Earth's moon -- about 4 billion years old.

Along with Metis and Adrastea, Thebe was discovered by scientists studying images from the Voyager spacecraft in 1979 and 1980. It's closer to Jupiter than Io is, but it's not so close that it's in danger of losing its altitude. The material in Jupiter's Gossamer ring probably comes from Thebe and another moon, Amalthea.

Speaking of Amalthea, shown here is an artist's rendition of the mysterious moon (inset: our best real view so far). Astronomers don't know much about it, but they do know it's the reddest body in the solar system. Unlike the other three moons that lie within Io's orbit -- Thebe, Metis and Adrastea -- Amalthea wasn't discovered by the Voyager science team. Edward Emerson Barnard discovered Amalthea it in 1892, and it had been almost 300 years since anyone had discovered a new moon orbiting Jupiter. Before that, the last person to discover a Jovian moon was Galileo.

This not-to-be-named moon marks an interesting dividing line in the wealth of satellites orbiting Jupiter. S/2000 J11, named after it was found in 2000, moves in the same direction that Jupiter spins -- as do all the moons that are closer to the planet. Almost every distant moon, however, orbits in the opposite (retrograde) direction, as this diagram shows. The only known exception is Carpo, sometimes known as Karpo, which was discovered in 2003.

About two-thirds of the Earth is covered in water, but Europa has about twice as much water as our home planet. Europa's might surface is covered in ice, but astronomers are almost convinced there is an ocean of liquid water underneath -- an environment shielded from Jupiter's intense radiation that might be hospitable to life. A cold, salty planet might not seem like a good place to live, but there are species on Earth that thrive in just those conditions.