Monkeys in Brazil Are Making Knives Just Because

Monkeys in Brazil have been observed producing sharp-edged stone tools, but there's a catch: They don't know what to do with them.

Wild bearded capuchin monkeys in Brazil deliberately break stones and, in the process, unintentionally make sharp-edged objects that are similar to cutting tools made by early humans, new research finds.

The finding means humans are no longer considered the only makers of knife-like objects, according to the new study published in Nature.

"We are not, at any point, arguing or suggesting that any of the known archaeological record was made by primates," lead author Tomos Proffitt, of the University of Oxford's School of Archaeology, told Seeker. "We suggest that this new data, however, raises interesting questions about the possible ways this stone tool technology developed before the earliest examples in the archaeological record appeared. It also tells us what this stone tool technology might look like."

Proffitt and his team observed the monkeys looking for rounded quartzite stones at Serra da Capivara National Park. The monkeys would then use these stones as "hammers," to forcefully hit quartzite cobblestones embedded in a cliff face. This action crushed the surface and dislodged the cobblestones, while the hammer would unintentionally fracture. The monkeys would sometimes lick some of the powdered material created during the process. 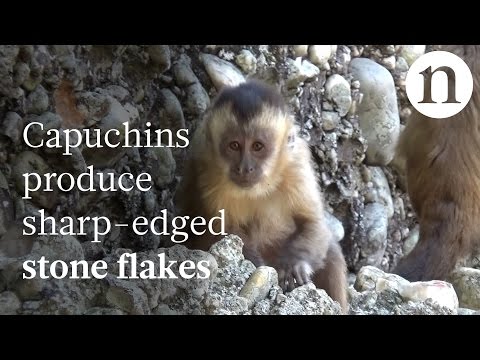 "This percussive behavior undertaken by the capuchins has nothing to do with cracking nuts," Proffitt said. "It seems to be aimed at crushing the surface of quartzite cobbles in order to produce quartz dust, which is then ingested and rubbed into the fur."

He added it's unclear why the capuchins do this, but "that it might be centered around ingesting a particular mineral found in the quartz powder or because the lichen attached to the surface of the cobbles may have some sort of medicinal purpose, although more work needs to be done to work out exactly why they are doing this behavior."

Bearded capuchins at other sites, as well as some Japanese macaques, are known to pound stones directly against each other, but the capuchins at Serra da Capivara are the only wild primates that seem to do this for the purpose of damaging the stones.

As for our closest living primate relatives, chimpanzees, they craft stick tools to fish around for termites and to help with other tasks, but they are not known to make tools out of stone.

Helen Roche, a director of research at CNRS, Paris-Nanterre University, told Seeker that stone-tool making among early humans began at around 3.3 million years ago. The genus Homo doesn't seem to appear before 2.8 million years ago, leaving a time gap.

She suggests that an australopithecine might have made the tools during this gap period. These were two-legged individuals similar to humans, but had a brain that was not much larger than that of modern apes.

Capuchins likely have even smaller brains, so the new findings could shed light on the minimum brain power and physiology required to produce stone cutting tools.

Scientists have previously suggested that humans could teach wild monkeys skills that they could pass on to others, potentially benefitting the entire troop. In this case, someone might show the Brazilian monkeys how to use their unintentionally produced sharp-edged objects as knives for cutting plant materials and other items, but Proffitt basically said this would be a waste of time.

"Monkeys can be taught to do many things, but I'm not entirely sure why you would want to teach wild capuchins to cut things," he said. "Also, I'm not sure why you would think that it would benefit them. They have evolved perfectly adequately to survive in their environment without ever needing humans to teach them anything."

Photo: A wild bearded capuchin monkey hammers with a stone in order to produce quartz dust. Credit: M.Haslam WATCH: Which Evolved First: Our Hands or Feet?