Fishermen for years have told tales about huge sharks trying to eat their motorboat engines, and now videos are proving this does indeed happen.

Shark experts believe that great whites, like the one seen in the below video shot just a few days ago, are attracted to electrical pulses emitted by some boat motors. 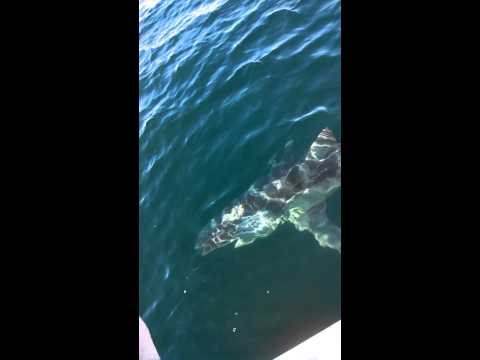 "He had the entire trolling motor in his mouth, and was moving it side to side, and it was shaking the boat," said Captain Scott Fitzgerald of Madfish Charters to news station WMBB. "I've been chartering for nine years, and I've never seen a shark try to attack my boat. It was very exciting for all of us. It really got our hearts beating hard."

The encounter, documented in more videos at Madfish Charters' Facebook page, happened about eight miles into the Gulf of Mexico off of Panama City Beach, according to the report. Fitzgerald and his crew could see the shark coming at them. They estimate that it was at least 10 feet long.

Fitzgerald said that the shark circled three times. During each go around, the great white would bite into the motor, which is brand new. Fitzgerald eventually had to leave the area, taking his now shark-bitten trolling motor with him.

Given that the metal motor could break off shark teeth, one has to wonder why a great white would chomp into one in the first place.

South Carolina Aquarium Shark Expert Arnold Postell explained to Owen James Burke at thecuttlefish.com, "Sharks have the ability to detect electromagnetic fields with their Ampullae of Lorenzini. These are 'jelly'-filled pores at the tip of the nose/snout of elasmobranchs designed to pick up minute electric pulses put off by muscle contractions of their prey."

Some boat motors must then give off electric pulses that are very similar to those of marine animals, confusing sharks.

Adding to the problem is that sharks tend to "taste" potential food items, be they a human leg or an old inner tube, to see if they're worth eating. In the vast ocean, food options can be feast or famine.

The shark probably tasted the motor repeatedly to see if it was worth eating. Fitzgerald kept pulling the motor up, away from the shark, which probably tempted the large predator all the more.

In any case, both shark and human survived the encounter.