Bats cock their heads, like curious doggies, while using echolocation to find dinner flying through the air.

The cute, quizzical head movements of a scientist's pet dog (a pug) has helped researchers uncover why bats do the same thing. Both animals make "head wags" to determine audio information about surrounding objects: a squeak toy for the dog, for example, or in the bat's case, the location of its next meal.

"We wanted to look at these movements and how they contributed to bats' precision and where a returning echo is coming from," said Melville Wohlgemuth, a postdoctoral fellow at the Johns Hopkins University department of psychological and brain science.

Wohlgemuth, who has been researching bat sensing for several years, said he began thinking about these movements one day because the bat head wags reminded him of the little thing that his pet pug "Willie Nelson" did when looking at an object. The dog was moving its cute little head to determine the source of a sound, just like a bat moves its head to get more information about its environment.

"Any animal that uses two ears -- even we -- do this," Wohlgemuth said. "We will cock our head while we are hearing. It's the dynamic movement that is helping us more than just turning an ear to the sound itself."

Bats use a series of clicks that they send into the environment and which rebound back to them to detect track and catch prey. This technique, called echolocation, has been well-understood for decades. But Wohlegemuth and his team are one of the first to show how the head and ear movements are used as well. 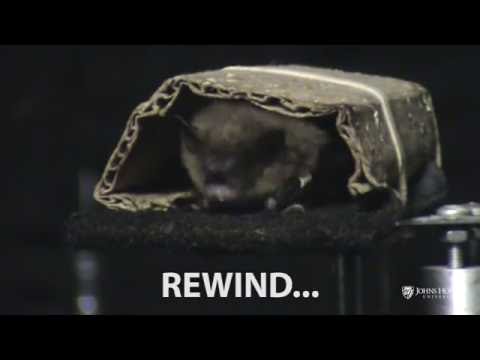 To do this, the researchers went out and caught a few big brown bats, brought them into the lab, and taught them how to sit on a platform while tracking moving prey with their head and ears. They didn't want the bat to fly to its prey, but rather watch it from a stationary position.

So they built a circular pulley system with tasty meal worms attached to fishing line. The scientists would then crank the pulley, turn the line and watch as the bats sent out sounds clicks to track the location of the rotating tasty morsels.

RELATED: Bats in China Are Resistant to White-Nose Syndrome Fungus

To track the movements, they affixed pieces of reflective tape on several parts of the bats' ears and head, and then captured the whole scene on a 3-D motion-capture video camera.

"You can move the insect back and forth in front of the animal and train the bat to follow it," Wohlgemuth said. "What we didn't realize is how tightly coordinated the bats sonar vocalizations are with the movements of the head and the ears."

The researcher said the study may help unlock secrets to other animals' hearing mechanisms as well.

"Never before has anybody characterized the head waggles," Wohlgemuth said. "Plus the movements of the ears haven't been seen before. The tight temporal coordination is amazing."

James Simmons, professor of biology at Brown University and an expert in echolocation, said that although the behavior of moving the ears with the sonar sounds has been observed before, the Johns Hopkins research study provided some new insights.

"This PLoS paper provides actual data from behaving bats to assess how bats may be exploiting changes in the receiving organ (the external ear) to somehow make sonar perception better," Simmons said in an e-mail to Discovery News. "The question now is what dimensions of the bat's perceptions are being enhanced, and by how much."

A journal article detailing the team's experiments will be published Thursday in the journal PLOS Biology, and includes senior author Cynthia Moss, professor of neuroscience at Hopkins and Ninad B. Kothari, a Johns Hopkins graduate student.

WATCH: The Amazing Connection Between Bats And Dolphins