American alligator Blanco will soon be moving to a plush reptile community.

Houston Zoo announced its white American alligator Blanco will soon be moving to a plush retirement community, according to chron.com.

Blanco is 11 feet long and weighs in at 180 pounds and is headed for a reptile show called "Crocodile Encounter" in Angleton, Texas.

Blanco (Spanish for "white") gets his name from his pale exterior, the result of a condition called leucism, in which the eyes retain their pigment (Blanco's are blue) but areas such as skin experience a loss of pigmentation. Thus he's not an albino, though he's probably often referred to as one.

The 2013 video below, from Houston Zoo, shows Blanco receiving some training and some treats for said training. Today Blanco is 30, but his species can live up to around age 50, so he'll have some time to enjoy his golden years. 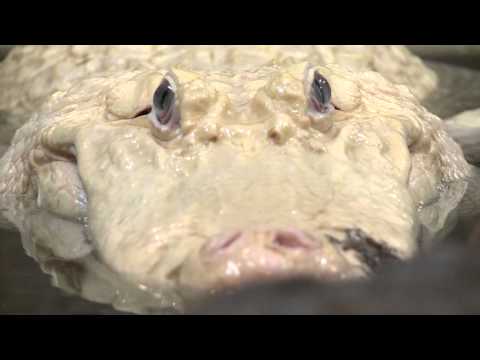 Meanwhile, Blanco's new home base has already welcomed him in advance.

"Blanco, the Houston Zoo's famous leucistic(white) alligator that has been a fixture for so many Houstonians, will soon be residing with us," Crocodile Encounter wrote on its Facebook page. "We are humbled by the opportunity to care for this wonderful animal as he ages and have provided him with all a retiring alligator could possibly want from life ... deep water, soft mud, and a bright Texas sky await him."

This week we learned that back in the last ice age, the first humans to populate Australia likely had to contend with

that might have been almost 20 feet long. That got us thinking: Which are the weightiest reptiles among whom modern humans have to live? So here we present the heaviest 10, based on average weight. We'll start small and count up -- getting "fatter," as it were -- until we reach the top heavyweight reptile on Terra Firma. First up, here's the lightest of the top heavies, the false gharial, a freshwater crocodile with a loooong, slender snout. On average, the native Malaysian weighs about 460 pouns (210 kilograms) and runs about 13 feet (4 meters) long.

Careful if you find yourself in a dark alley with this fellow, the mugger crocodile. This 495-pounder (225 kilograms) is an accomplished hunter that hides itself and lies in wait to ambush unsuspecting birds, fish, other reptiles or mammals. It can grow to almost 11 feet long om average (3.3 meters). It's the most widespread of India's three crocodile species.

, as it's known in the language of taxonomy, is a common inhabitant of coastal wetlands from North Carolina, down to Florida, and across the Gulf of Mexico to Texas.

Remember the false gharial in our first slide? Well, here's a gharial with no false in front of its name. Weighing in at an average 550 pounds (250 kilograms) and stretching nearly 15 feet (4.5 meters) long, it's sometimes known as the fish-eating crocodile. Its name derives from the unique shaping of the end of its snout, which looks like a kind of earthenware pot whose name in Hindi is ghara. The huge hunter is another of India's three crocodile species (like the mugger crocodile we just met).

No slouch in the big reptile department is the American crocodile. We're taking a leap up in size now, as this creature typically runs about 740 pounds, even though it runs a bit shorter in length (13 feet) than, say, the gharial. Though confined largely to southern Florida and Puerto Rico, it still has managed to bounce back as a species. There are a couple of thousand of them now, up from just a couple of hundred in the 1970s. It can eat prey as big as cattle but in general its diet is largely fish-based.

Weighing in at an average 770 pounds or so, the black caiman is One. Enormous. Crocodile. The carnivorous beast lives in the Amazon basin and other freshwater habitats in South America. It can be uncomfortable to think about, but the larger of these crocs can and will eat cute mammals like sloths and monkey. Deer aren't safe either, nor are cattle, horses or dogs.

Alligators And Crocodiles Use Tools To Hunt

Did you wonder if we'd ever come to a top heavyweight reptile that wasn't an alligator or crocodile? Here we are! Meet the leatherback sea turtle, the biggest turtle of them all. Unlike other sea turtles, this 800-pound (364 kilogram) creature doesn't have a bony shell. Instead its upside is skin and and flesh. The turtle's range varies widely in the Atlantic and Pacific Oceans. They eat jellyfish, almost exclusively, and are known for migrating many thousands of miles between nesting locations. Lengthwise, they run about the size of an NBA small forward, at 6.6 feet (2 meters).

It's back to crocodiles now, with the orinoco. This monster runs nearly 850 pounds on average, nearly 400 kilograms. The species is listed as critically endangered and exists, in small numbers, only in freshwater habitats of Colombia and Venezuela, especially the Orinoco River. The apex predator will take a shot at anything -- birds, mammals, reptiles. But it mainly eats fish. On land or in water, it stealthily stalks its prey. There are reports it has eaten other, smaller crocodiles like caimans and even consumed members of its own species.

"See you later, alligator! In a ... Nile crocodile???" The Nile crocodile is the second-weightiest reptile in our gallery, tipping the scales at an average of 900 pounds (410 kilograms) and stretching the tape measure to just under 15 feet (4.5 meters). It can be found in aquatic habitats all over Sub-Saharan Africa. The apex predator stalks marshes, lakes, and rivers, eating the usual crocodile diet of mammals, other reptiles, fish, and birds. Their vise-like jaws clamp down so hard that prey just have no chance. They have a structured social order that hands the biggest, oldest males the best places to bask in the sun and first dibs on food.

). It weighs on average just under 1,000 pounds and stretches 15 feet long (450 kilograms, 4.5 meters). It can live in saltwater but prefers places like lagoons, deltas, and swamps. They have an incredibly wide range, the widest of any of today's crocodiles -- from northern Australia, thoughout southeast Asia and the east coast of India. And it's our third of India's crocodile species, along with the mugger and the gharial. True to its size, there's almost nothing it won't consider prey. The ambush master will take on mammals, fish, reptile, birds, fish, crustaceans -- you name it. They're thought to have the most powerful bite of any living animal. Steer clear of this one, if you value life and limb.