NASA will begin work on the next big space telescope after the James Webb Space Telescope, the Wide Field Infrared Survey Telescope, which will be constructed from a refurbished military spy telescope.

Next month, NASA will begin work on its next major space observatory after the James Webb Space Telescope, which is finishing construction for launch in 2018. The new mission is called WFIRST (Wide Field Infrared Survey Telescope) and will investigate dark energy, exoplanets and galaxy formation. It is expected to fly in 2024.

"Formulation is when we formalize the mission requirements," said David Spergel, co-chair of the WFIRST science definition team, in an e-mail to Discovery News.

"An example of something that we will decide during formulation is the filters that we will use. We need to weigh the relative merits of being sensitive to bluer photons versus having sharper wavelength coverage ... Improved blue sensitivity will help us better characterize the properties of stars in nearby galaxies, but possibly at the cost of less accurate determination of distance to galaxies through photometry."

NEWS: Psst! What Would You Do With a Spy Telescope?

WFIRST's advantage is its immense field of view. It uses an old, unflown spy telescope that has the same mirror size as Hubble - 2.4 meters - but a field of view 200 times wider. This will allow it to cover more sky at greater depth in the infrared than any observatory before, Spergel said. 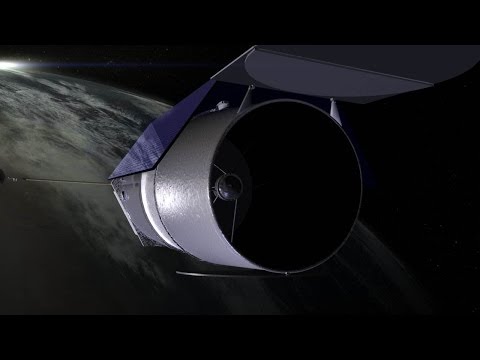 Additionally, a coronograph (an instrument that blocks light from bright objects) being constructed for the mission will be "orders of magnitude more sensitive" than other space coronographs, he said, allowing for exoplanet properties to be better understood.

The mission will use a National Reconnaissance Office telescope, which was gifted to NASA a few years ago, while resurfacing the mirror and adding instruments and electronics. NRO actually gave two telescopes to NASA, but for the moment the second one will be used as a backup for WFIRST.

WFIRST's formulation phase comes amid a budget boost from Congress, which approved a fiscal 2016 budget for the project of $90 million, more than six times NASA's $14 million request. WFIRST is also the top mission in the National Research Council's decadal survey of 2010, where astrophysicists were asked to identify their research priorities.

This is an artist's impression of the WFIRST mission in Earth orbit.

Every year, Discovery News turns to our faithful readers to see which space stories excited you the most and 2015 has been yet another incredible year for astronomy, spaceflight, planetary science and solar system discovery. After pulling together the nominations by considering web traffic over the past 12 months,

the selection was put up for a vote

across social media and the top 10 quickly became obvious -- with a very clear winner. Can you guess which stories made it into the top 10? Read on to find out.

(Want to compare this year's top 10 with last year? Read "

. In March, the mission, that had made the slow transit from massive asteroid Vesta,

, revealing a fascinating, pock-marked surface. A puzzle quickly presented itself -- what the heck are those bright spots? Although Dawn is orbiting the tiny world closer than ever,

, highlighting just what a mysterious and fascinating place Ceres is.

Sure, it's a movie, but it's a movie that starred Matt Damon and co-starred SCIENCE! Not only did "The Martian" become a box office success, it was a rare movie that pleased scientists and the general public alike. There were a

, but overall, it was a science fiction movie that realized that scientific accuracy can drive a great story forward without having to unnecessarily stray into scientific fantasy.

The Martian: Science vs. Fiction

While many of the headlines focus on its younger roving cousin, Curiosity, NASA's Mars Exploration Rover Opportunity is still exploring the Red Planet despite 10 years of dusty wear and tear. The veteran robot

has even completed an extraterrestrial marathon this year

, can pay off. Be sure to keep an eye on this mission, it's not done with Mars quite yet.

The NASA/ESA Hubble Space Telescope is nothing short of a scientific and cultural phenomenon. Since 1990, the powerful space telescope has been pushing the boundaries of astronomical breakthroughs, refining our understanding of our place in the cosmos. And this year it celebrated its

quarter of a century

in space -- an incredible feat. As we look forward to the launch of NASA's James Webb Space Telescope (scheduled for 2018), we can only hope that Hubble's successor will have the longevity of the world's most famous space telescope.

Hubble at 25: The Space Telescope by the Numbers

Hubble at 25: What's Next for the Space Telescope?

Hubble at 25: Brief History of the Hubble Space Telescope

continues to wow the world with incredible images and science from the slopes of Mount Sharp in the center of Gale Crater. The robotic geologist has not only revealed the stunning array of surface features the region has to offer, but it has also discovered potential for past habitable environments and

. It is a mission of epic proportions and has been a Reader's Choice favorite since it landed on the Red Planet in 2012 -- we can't wait to see what adventures Curiosity has in store for us in 2016.

After a decade of orbiting Saturn, NASA's Cassini mission has started

. Having most recently carried out its final flyby of enigmatic moon Enceladus, the spacecraft will begin maneuvers in 2016 that will ultimately see the mission fly through the planet's ring plane. Then, the spacecraft

will conclude its "Grand Finale"

, burning up in Saturn's atmosphere. 2015 has been a huge year for Cassini, revealing more incredible science about Saturn's system of moons, rings and dynamic atmosphere and we look forward to more science and beautiful images like this one

This story rapidly became 2015's viral story of the year because...

probably a cloud of comets

, but the mere hint of

a possible alien megastructure orbiting a star some 1,500 light-years away

was enough to throw the internet into a spin. But the best thing about this story is that NASA's Kepler space telescope was thrown into the limelight and the stunning science of exoplanet detection became an international talking point. Since the original detection of the weird transit signal discovered by citizen scientists of the Planet Hunters project, the SETI Institute has turned its powerful Allen Telescope Array at Tabby's Star

to find no transmitting aliens

aliens, it just means there are far more likely explanations.

Ahhh, water on Mars. Yes, we already know that there's water ICE on Mars, but this time it's different. Well, it MIGHT be different. Way back in 2011, some strange seasonal channels were spotted by NASA's Mars Reconnaissance Orbiter on Martian slopes. Though they looked like channels created by flows of liquid water, scientists urged caution -- Mars' atmosphere is so cold and thin, only short-lived water ice should exist, right? But after orbital analysis this year, the chemical residue of these channels was analyzed, revealing that these channels may well be caused

. However, this water isn't your fresh mountain spring variety --

if it is indeed liquid water...

MORE: So Liquid Water Flows on Mars -- Now What?

Commercial access to space has been ramping-up in recent years and 2015 has seen some of the biggest advances.

Orbital Sciences has bounced back

in 2014 and, though suffering its own huge setback with

in June, SpaceX returned with a

. Add these historic advances to

and we have seen 12 exciting months of commercial spaceflight successes not only to resupply the space station, but also to launch satellites and refine rocket technology. Next stop Mars?

It's been a long wait, but in July, NASA's New Horizons mission flew through the Pluto-Charon system for its

. The spacecraft, which took nearly a decade to reach the outer solar system, is now blasting through the Kuiper Belt and mission scientists are

steering it toward a Kuiper Belt object (KBO)

for another flyby in 2019. But its Pluto flyby was just the beginning -- the spacecraft recorded so much data that it continues to beam back detailed information about the dwarf planet,

perplexing mysteries along the way

. This has been a historic year; we're finally seeing Pluto up-close and in high-definition for the first time since it was discovered by American astronomer Clyde Tombaugh in 1930.