Meteor Over Western US Was Reentering Chinese Rocket

A slow-moving human-made meteor tumbled and broke apart over the US on Wednesday, providing some awesome fireworks.

Late on Wednesday night, a fireball lit up skies over Western US states, but this wasn't just any old meteor. It wasn't even connected with the Delta Aquarid meteor shower that is expected to peak tonight and Friday. It was a large piece of space junk from a Chinese rocket that was launched in June.

RELATED: An Orbital 'Pac-Man' to Chomp Through Space Junk?

As the object tumbled through the upper atmosphere, its slow progress was spotted from California, Nevada and Utah, igniting a flurry of social media reports and eyewitness video. An especially cool video was captured by a visitor to Griffith Park Observatory, who had an astronomer guide present to describe what was going on:

From these handy eyewitness accounts, conclusions as to the origin of the disintegrating object could quickly be made by astronomers. This was no space rock, it was a chunk of space junk:

Other Twitter users pointed out that there was a predicted reentry of a Chinese rocket upper stage -- the Chang Zheng (Long March) 7, or CZ-7, that was launched on June 25 -- so that was the most likely cause of the tumbling object that visibly broke up in two before fading away.

This has now been confirmed by the U.S. Strategic Command's spokesman Lt. Colonel Martin L. O'Donnell who said the highly visible meteor was caused by a Chinese CZ-7 rocket which reentered the atmosphere over North America near California at 9:36 p.m. PDT. O'Donnell told the LA Times that there have been no reports of damage by any debris that may have reached the ground.

As videos of the rocket reentry started to go online from California and Nevada, a surprise was in store for Kevin Anthony who was hunting for Pokemon with his son in Utah.

"My son and I ... found something unexpected. We were hoping for maybe a Zapdos, but this is cool too," Anthony said in the description of this spectacular reentry video: 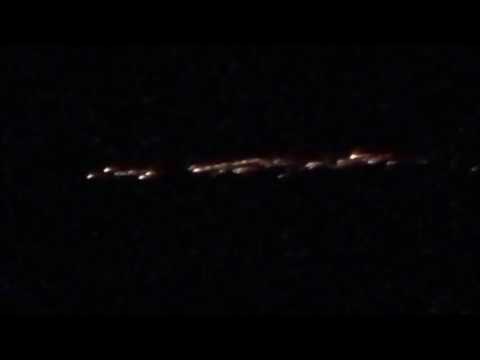 So it seems that the journey of last night's human-made meteor came to an end somewhere near Utah Lake. It seems likely that some pieces of the spent rocket stage may have made it to the ground.

There were some concerns aired on social media that having Chinese space junk burning up over the US was somehow a national security risk, but I think, in this case, the thick atmosphere kept our nation secure.