After a condor pair’s egg went mysteriously missing in the middle of the night, the duo is back on track, becoming surrogate parents.

After a California condor pair's egg went mysteriously missing in the middle of the night, the duo is back on track, raising a foster chick that biologists surreptitiously slipped into the birds' mountain nest.

The family affair began with condors #111, a 22-year-old female hatched at the San Diego Zoo Safari Park, and #509, a 7-year-old wild male. The two began courting in 2014, and nested together near the Hopper Mountain National Wildlife Refuge in southern California, according to the Cornell Lab of Ornithology.

Before long, #111 laid an egg. A team of U.S. Fish and Wildlife Service (USFWS) biologists snuck into the nest on March 2 to set up a bird cam and check the egg's viability with a candle test, in which a bright light is used to check the growing fetus inside. They reported that everything looked good, and estimated that the egg would hatch between April 4 and April 6. [10 Species You Can Kiss Goodbye]

But then, the egg went missing.

On the night between March 20 and March 21, it disappeared. In order to save battery power, the bird cam does not record during the night, so there's no proof of what happened to the egg. But, in all likelihood, a predator made off with it, leaving only a few eggshell fragments behind, according to the Cornell Lab of Ornithology, which runs the cam.

This development was worrisome to scientists, as the California condor (Gymnogyps californianus) is critically endangered,according to the International Union for Conservation of Nature (IUCN). In 2010, there were only 104 adult California condors of breeding age in the wild, and just 44 had produced surviving offspring, the IUCN said.

After the egg vanished, USFWS biologists devised an action plan: On March 21, they rappelled into the nest and replaced the missing egg with a dummy egg. Condor #111 entered the nest cavity just as they left, and - to everyone's relief - began incubating the fake egg.

Her partner, #509, incubated the dummy egg, too. In the meantime, the recovery team called the Los Angeles Zoo, which was raising eggs that condors had laid in captivity. The zoo gave one of its eggs to the USFWS scientists, who furtively rappelled into the nest again and swapped the dummy egg for the new foster egg on April 3.

The swap worked. The adults - which look a bit like hunchbacked, black umbrellas - incubated the egg, and it hatched on April 4, making it the first time that a condor chick had hatched live on a bird cam, according to the Cornell Lab of Ornithology. 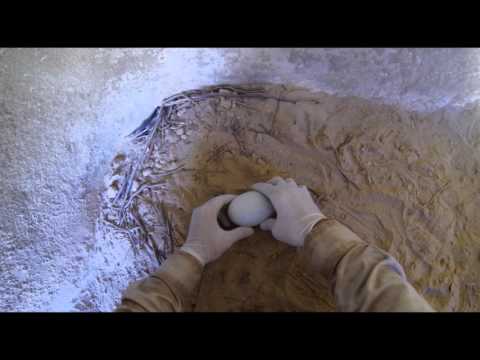 It's unclear whether the 9-ounce (255 grams) chick is a male or female, but a blood test within its first year of life will clear that up. Once the chick turns 4 months old, biologists will tag it so that they can track it when it starts flying, at about 6 months of age.

For now, both #111 and #509 are taking turns keeping the chick warm and feeding it. Bird enthusiasts can watch the chick grow up on the California condor bird cam, and follow it on Twitter: @CornellCondors.

The biologists hope that the mystery thief responsible for the first egg's disappearance will leave the new chick alone.

"Sometimes, condors select nest cavities that are accessible to terrestrial predators that are skilled climbers, such as bobcats, black bears and mountain lions," the Cornell Lab of Ornithology said. "We will continue to closely monitor the condor nestling via the live streaming camera and newly placed motion activated Bushnell game camera that is capable of taking nighttime images."

Condor chicks remain dependent on their parents for more than a year, so birdwatchers will have plenty of time to watch the little chick grow up, the lab said.

In Photos: Birds of Prey In Photos: The World's Freakiest Looking Animals Photos: World's Cutest Baby Wild Animals Copyright 2016 LiveScience, a Purch company. All rights reserved. This material may not be published, broadcast, rewritten or redistributed.

Ah, summer -- a time of warmth, sunshine, and artificially circulated air billed by the kilowatt hour. How about a natural breeze made by wings instead? Ones that span more than 10 feet tip-to-tip? Join us as we survey a collection of birds with just plain amazing wingspans. We'll be sure to let you know when you're looking at the big kahuna -- that is, the largest wingspan among living birds. For starters, here we see the bearded vulture, tending to youngins. The hulking creature can weigh 15 pounds, with wings that can span 9.3 feet. It enjoys living at high elevations -- cliffs, for example, that might overlook greener vistas where enough prey and predators exist that they can scavenge on the leftovers. There are more than a dozen subspecies, and they have an extensive range -- from southern Europe, to Asia, to Africa.

The California condor has the widest wingspan of any bird in North America, topping out at about 9.8 feet. It weighs an astonishing 26 pounds and, being a vulture, the scavenger dines on a diet heavy on dead animals. By 1987 it had become extinct, the remaining birds in the wild captured and protected. However, they have since been reintroduced into the wild in parts of Arizona, California and Utah.

You're looking at North America's largest predatory bird, the golden eagle. With a wingspan that can reach about 7.5 feet, the dark-brown raptor can also be found in North Africa, Europe, and Asia. They love open spaces, anywhere from sea level to more than 2 miles in elevation. They eat the usual poor critters on the ground that can't evade them, such as rabbits, ground squirrels, prairie dogs, and marmots. In the wild, they can live to some 30 years old. If you click this link below, you'll get an even better idea of a golden eagle's size, as it takes down an atypical form of prey: an unlucky young deer.

The great white pelican puts tons of span in its wings, with a mind-boggling wingspan of about 9.5 feet. With a penchant for warm and shallow waters, these birds can be found in Europe, Asia and Africa. They eat mostly fish and will fly more than 50 miles in a day while seeking food.

VIDEO: Why Some Birds Don't Have Penises

The Andean condor lives in the Andes Mountains and along the Pacific coastline of South America. Its wingspan can reach 10 feet across, and these vultures put their powerful flappers to good use searching for dead deer, cattle or other carrion.

Speaking of vultures, here's another one -- the griffon. Its wings can span a bit more than 9 feet across and it can weigh up to 25 pounds. True to its vulturesome nature, it also prefers to lead a scavenging lifestyle, making its humble living in southern Europe, Asia and Africa.

Meet the marabou stork. Its top recorded wingspan is 10.5 feet. It lives in sub-Saharan Africa and has been uncharitably compared to an undertaker in appearance, with its heavy black wings, spindly legs and white feathers on its head. It's even known to have a bit of a bad temper.

The whooper swan boasts a wingspan of about 9 feet and can weigh up to 31 pounds. These northern hemisphere birds spend a great deal of time in the water and have a wide breeding range across sub-Arctic Europe and Asia. Strong fliers, they'll migrate hundreds to thousands of miles. And, on a romantic note, their pairs mate for life.

'Bubble-Pop' Bird May Be Rarest In U.S.

Finally! The bird you've all been waiting for. Here's the longest wingspan of any living bird, and it belongs to the wandering albatross. You can see why one is inherently uncomfortable to have around one's neck. How wide a wingspan, you ask? About 11.6 feet at its top length! Even greater spans have been alleged, but not verified. Its mean wingspan among the species, meanwhile, hits 10.2 feet. The seabirds dine at night on fish, crustaceans, cephalopods, and whatever other animal remains they can find just floating in the water for the taking. They'll follow ships looking for just such fare. Adults typically weight about 25 pounds and they can live up to about 50 years.