Mini Wearable Robots Will Crawl Over Your Body

Rovables are tiny climbing bots that can move freely all over your clothes — if that's what you're into.

Before you swat that big insect off your shirt, might want to check to make sure it's not actually a mini robot.

Meet Rovables, tiny climbing bots with magnetic wheels. These prototype wearables can crawl freely on clothing and perform all kinds of weirdly helpful tasks. And yeah, they are creepy.

Each one is about 1.5 inches by 1 inch and contains a battery, micro-controller and wireless communications. Neodymium magnet wheels grip between fabric to keep the bot in place on clothing. Engineers from Stanford and MIT collaborated on developing Rovables, which are being presented this week at the ACM User Interface Software and Technology Symposium (UIST) in Tokyo.

Unique sensors and algorithms allow Rovables to have limited autonomous operation. For now, the bot can go continuously for 45 minutes before its battery needs recharging. An inductive coil on the bot's undercarriage allows for wireless charging - and Rovables are smart enough to know when it's time to go locate a charger.

They can be equipped with a tiny vibration motor or actuator to push on skin for, say, a gentle reminder or wake-up call. A bunch of them will come together to form a wearable display such as a name tag. As mobile sensors, they can be programmed to move to the best spot for health monitoring. With help from hooks, Rovables could even adjust your clothing for you. They also double as interactive jewelry.

RELATED: Anything You Can Do, Robots Can Do Better: Photos

"We envision that future wearable technology will move around the human body, and will react to its host and the environment," the team wrote in their paper for UIST. In keeping with that vision, the team thinks their bots will get smaller and smarter. "We believe in the future Rovables can become the size of the fingernail and completely autonomous." Shiver.

The researchers describe a scenario where a woman wears a bunch of fingernail-sized Rovables all the time. They measure her progress at the gym similar to a fitness tracker. During her commute by train they coalesce to form a smartphone-like screen that plays a movie. They pull up her sleeves if she gets too warm, tap her on the shoulder when she gets an important email, form a light on her back during an evening bike ride, monitor her sleep, and wake her up in the morning. Totally normal.

We're not quite there yet, but check out the current prototype bots in action: 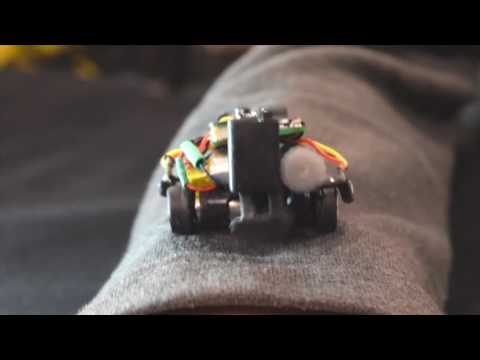