As the NASA spacecraft sped toward the Jovian system, it created a stunning time-lapse video of Jupiter and moons. 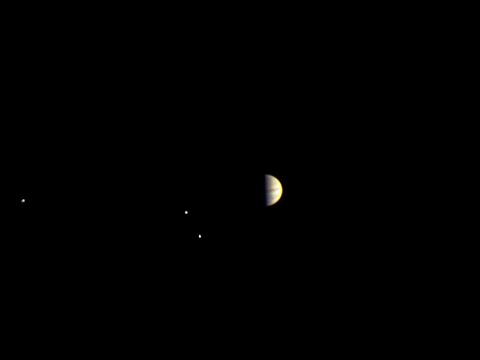 On July 4, NASA's Juno mission arrived at Jupiter after carrying out a picture-perfect orbital insertion maneuver, burning its rockets to shave-off some speed as it zoomed deeper into the gas giant's gravitational well. But a few days before all the drama on Monday unfolded, Juno was keeping a close eye on its final destination.

In this stunning time-lapse, from June 12 (when Juno was 10 million miles from Jupiter) to June 29 (at 3 million miles), Juno could easily see a crescent Jupiter, plus the bright points of light of the Galilean satellites. Volcanic Io is the innermost moon, followed by Europa and then Ganymede and Callisto pops into view later in the video in the top right.

During the Jupiter orbital insertion, mission managers powered down Juno's instrumentation to protect them from the surge in radiation as the spacecraft dived deep into the Jovian system, so no images of close approach were possible as the cameras were turned off.

RELATED: These Missions Have Journeyed to Jupiter

However, over the coming weeks, the new, human-made satellite of Jupiter will undergo commissioning, preparing it for science operations in October. So this video is the first tantalizing look at the gas giant from afar; the next photographs of Jupiter will be much, much closer.

Why July 4 Is a Big Day for Space Exploration:

style="text-align: left;"> For Americans, 1976 was a huge year because it celebrated the bicentennial of the United States' founding. As part of the celebrations, NASA planned to land Viking 1 on the surface of Mars -- the very first U.S. lander to make it there. But a snag occurred when the spacecraft drew closer. High-resolution imagery from the spacecraft revealed that the originally planned landing zone was likely too rocky to set down the spacecraft.

style="text-align: left;"> So a new site was selected and there was a two week delay, which luckily led to Viking 1 touching down safely in Chryse Planitia (400 miles west of its original spot) on another anniversary. Its arrival on July 20, 1976 happened to be exactly nine years after humans landed on the moon for the first time, in the Sea of Tranquility. Viking 1 lasted six years on the surface and famously searched for life there, with results that are still mystifying scientists today.

style="text-align: left;"> NASA took a bit of a break from visiting Mars after the Viking landers ceased work in the 1980s, but the 1990s represented a renaissance in Mars interest. Mars Pathfinder took the landing idea a step forward by deploying the first rover, Sojourner, on Mars. Although the rover is tiny by today's standards (about the size of a milk crate), its ability to rove and to be directed towards certain rocks allowed for more precise sampling than in the past.

style="text-align: left;"> Mars Pathfinder would almost be forgotten today in the excitement of the Opportunity rover lasting more than a decade on Mars since its landing in 2004, and the Curiosity rover making a high-profile landing in 2012. (Both rovers have found signs of water on the surface, which Pathfinder did not.) However, Pathfinder came back to public consciousness in 2015. That's when the movie The Martian featured stranded astronaut Mark Watney looking at the Pathfinder landing site as part of his grand plan to get off the planet.

style="text-align: left;"> Image: The Sojourner rover of the Pathfinder mission, the first to have a rover on Mars. Credit: NASA

style="text-align: left;"> The Deep Impact mission culminated in 2005 and came with its own special July 4 fireworks. For the first time in history, the spacecraft threw a 820-pound impactor at a comet -- Comet Tempel 1 -- to learn more about what was inside. Since comets are primitive leftovers of the solar system's formation, this helps scientists learn more about its history. This makes Deep Impact part of a legacy of cool comet missions that helped with the Rosetta mission, which has been at Comet 67P/Churyumov–Gerasimenko since 2014.

RELATED: Why Comet Oxygen is Bad for the Search for Aliens

style="text-align: left;"> As for the Deep Impact spacecraft, it kept flying for another eight years until controllers lost contact with it. Druing its extended mission, it saw Comet Hartley 2 from close-up, and comets Garradd (C/2009 P1) and C/2012 S1 (ISON) from a distance.

style="text-align: left;"> STS-121 was the second flight to test out techniques for making safer space shuttles. This was important in the wake of the Columbia crash, where seven astronauts died during re-entry because debris fell off during launch and damaged the shuttle's heat shield (thermal tiles). NASA calls STS-121 the most photographed shuttle mission to that time, because it had more than 100 cameras filming it in case of more debris.

style="text-align: left;"> The crew helped to outfit the International Space Station with another crew member (bringing expedition numbers back up to three) and moving 7,400 pounds of supplies and equipment. They also did three spacewalks for station maintenance and to test procedures to seal broken shuttle tiles in orbit.

style="text-align: left;"> Juno will be the first long-term mission in Jupiter's system since the Galileo mission, which ran in the 1990s and 2000s. Juno will arrive on July 4 and make an incredible, 106-day orbit before settling into a mapping orbit that will bring it roughly 3,000 miles above Jupiter at its closest. The spacecraft will regularly whizz out closer towards Jupiter's moons to avoid radiation from the giant planet, then pull back in to do more mapping. Its nominal mission ends in 2017, but could be extended if the spacecraft is healthy and funds permit.

style="text-align: left;"> Juno will probe the origins of Jupiter, such as how the planet was formed, whether it has a core, and how its magnetic field behaves. The answers are supposed to yield some clues about how the solar system came to be. Also, when we learn about Jupiter we may be able to extrapolate some of the findings to Jupiter-sized exoplanets, giving us thoughts about solar system creation more generally in the universe.