An acres-wide area where lava meets the ocean fell into the Pacific on New Year's Eve.

A large section of a 26-acre lava delta collapsed into the ocean in Hawai'i Volcanoes National Park and slid into the ocean on New Year's Eve. The waves that followed took out part of a nearby sea cliff and a viewing area, the Park Service said.

You can see a plume of gas, ash and steam that came after the collapse in the video below. 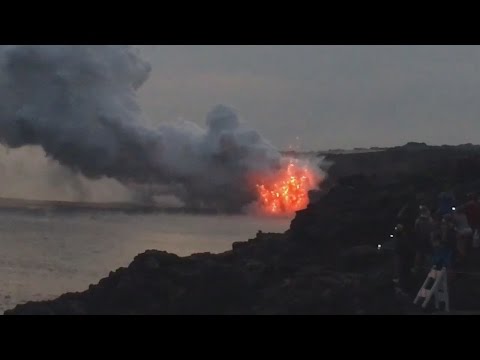 The Park Service closed the Kamokuna lava viewing area near the site around 2:45 p.m.

But that didn't stop five visitors from making their way past the rope closure line, the Park Service reported. As the group headed toward coastal cliffs, two park rangers chased after them and convinced them to turn around. About 15 minutes later the section of cliff where the visitors were standing fell into the ocean.

"It was a really close brush with death for them," Eruption Crew Ranger Travis Delimont said on the National Park Service website. "Luckily, they finally listened to us and turned around in time," he said.

A lava delta forms when new, unstable land is formed as lava enters the ocean. The process also produces hydrochloric acid, according to the Park Service, and other dangerous volcanic particles that can irritate eyes, skin and lungs.

"Fortunately, there were no aircraft or boats reported in the area at the time of the collapse, nor were any visitors on the delta itself," said Park Superintendent Cindy Orlando. "Had anyone been close by on land, water or air, lives would have surely been lost."