Watch a Stratospheric Balloon Launch a Rocket Into Space

Zero 2 Infinity has released footage showing a successful test of the first small satellite launcher to employ a stratospheric balloon as its first stage.

A radical new way of lofting satellites into orbit passed a key test earlier this month. Zero 2 Infinity, a Spanish company that develops stratospheric balloons to access near space, sent one of them soaring high above the planet and then successfully fired a rocket that is designed to launch satellites into space.

Stunning footage sent back from the balloon shows the rocket, called Bloostar, zooming away against a stunning backdrop of Earth below. Bloostar's test took place at a height of about 15 miles (25 kilometers) - more than twice the height of commercial airplane flights.

The company says that Bloostar is the first small satellite launcher to employ a stratospheric balloon as its first stage. Preliminary results from the test flight confirm that the rocket can ignite and fly in a stable trajectory, and that it would be able to deploy parachutes and be recovered from the sea. The team also validated the telemetry systems in space conditions and monitored the launch sequence. 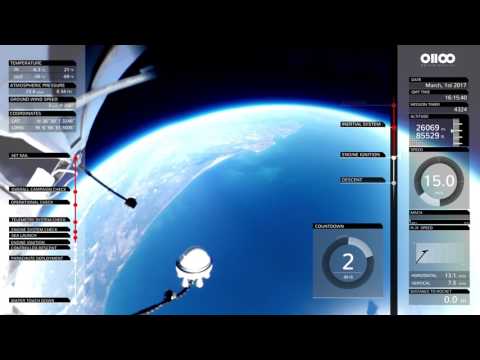 "This is an important development in Bloostar and our space work," she added. "We have shown this can actually be done."

While the technology is still under development, Bloostar has attracted attention from satellite manufacturers and telecommunications companies, collecting letters of intent for future flights that amount to almost 250 million euros ($267 million).

Zero 2 Infinity's long-term goal is to put small satellites in orbit using Bloostar, and to fly humans to the edge of space inside high-altitude balloons that can go as high as 40 kilometers (25 miles).

Zero 2 Infinity is a privately held company, and updates on its technology development are sparse. Some of its previously disclosed milestones include starting spacesuit testing in 2014 and adding former astronaut Michael Lopez-Alegria to its board of advisors in 2015.