Journey to the Edge of Space (360 Video)

Experience what it's like to leave Earth, traveling to over 90,000 feet into the stratosphere. 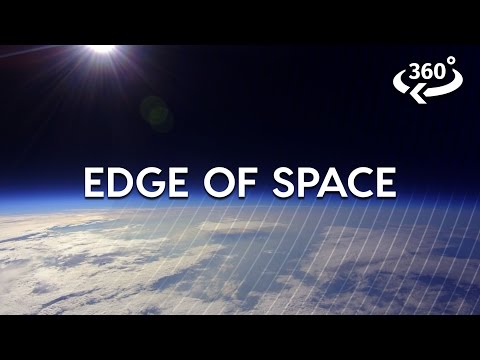 What is it like to go to the edge of space? Well, you're about to find out. This video is the first of its kind. The Seeker team attached a VR camera rig to a weather balloon and sent it out of the troposphere and into the stratosphere at 65 miles per hour.

Weather balloons have been used by meteorologists for over a century to get a snapshot of the Earth's atmosphere, which allows them to predict weather patterns. One of the first documented uses of a weather balloon was by a French meteorologist named Leon Teisserenc de Bort as early as 1896. His work actually led to the discovery of the tropopause and stratosphere, two unique layers in Earth's atmosphere.

After that you'll reach the cruising altitude of most commercial flights, but if you take a look around the 360 video you'll see a view you've never seen out of an airplane window before.

Soon you'll arrive to an altitude where you would not be able to survive without a spacesuit. The air pressure here is 90% lower than it is on Earth. If you look around you can see precipitation falling down around you, and if you listen closely you can hear it too. When it falls to Earth this precipitation will become rain, but this high up it's so cold that what you're seeing is sleet and snow.

RELATED: 360 Video: One Woman's Triumph Over HIV in Ghana

Once you hit the jet stream you'll be traveling at 65 miles an hour and ascending at over 1,000 feet per minute. Shortly after this, the Seeker VR cameras died, but the weather balloon kept going for several thousand feet.

Weather balloons are typically filled with 300 cubic feet (8.5 cubic meters) of helium gas. Once it reaches the thin air of the stratosphere, the helium inside expands so much (sometimes to the size of a truck!) that the balloon pops and falls back to Earth.

When our Seeker weather balloon finally popped it sent the VR cameras tumbling to the ground. Luckily, the team found them just a few miles away from where they were launched with everything still fully intact!