On the dwarf planet Ceres, volcanoes rage - but instead of hot lava coming out of them as on Earth, they spew brine and ice.

Previously, Dawn identified a strange mountain and other features that seemed to have been created by an ice volcano. [Ceres Probably Has An Ice Volcano (Video)]

Now, scientists at the Max Planck Institute for Solar System Research (MPS) have found evidence of such volcanic activity in action at the Occator impact crater, whose central pit has a bright, mineral salt material coating it that forms an upraised dome.

The scientists found that the salty stuff in the crater is younger than the crater itself: It's only about 4 million years old, against the crater's 30-million-year age. That means the mineral salts welled up from below the surface, just as magma does on Earth. Such cryovolcanism has also been seen on Pluto and Saturn's moon Enceladus. At a distance of 257.4 million miles (444 million kilometers) from the sun, Ceres is the closest object that researchers have spotted that activity on. 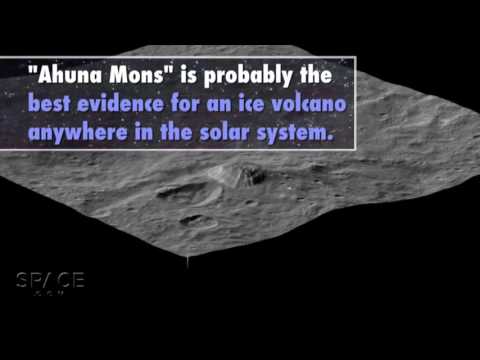 "In these data, the origin and evolution of the crater as it presents itself today can be read more clearly than ever before," Andreas Nathues, lead author on the new work and the MPS team's framing camera lead investigator, said in a statement.

Occator crater is in the northern hemisphere of Ceres and is 57 miles (92 km) in diameter. The crater hosts a 7-mile-wide pit in the center, and its rim rises to 2,460 feet (750 meters) from the surface. Within the pit is a bright dome about 1.8 miles (2.9 km) across, which is made of the younger, bright material the MPS scientists found. Data from infrared cameras shows that it contains salts called carbonates.

One thing that makes researchers think the dome is cryovolcanic, rather than just something buried beneath the crater site, is that other, later impacts did not expose similar material.

To estimate the age of the crater and the dome, the team counted craters in the area. Lots of cratering means a given patch of surface is older and has been exposed longer.

The odds are that the impact that made Occator allowed the brine to come closer to the surface, eventually erupting out.

The new work was detailed Feb. 17 in The Astronomical Journal.