Immerse Yourself in a Virtual Scuba Dive

The Amphibian is a full-body system that mimics the sights, sounds, temperatures and even the weightless feeling of scuba diving.

Real scuba diving involves far more than just putting on the mask. So it makes sense that a virtual reality simulator replicating the experience would go beyond a headset.

The Amphibian VR simulator, developed by computer researcher Dhruv Jain and his team, is a full-body system that mimics a buoyant sensation and even makes your hands get colder as you "dive deeper."

Jain, who has a hearing disability, started scuba diving when he arrived at the MIT Media Lab. For him, the activity dulled the senses in a relaxing way and felt liberating. So he came up with the idea to share that experience with others who are physically unable to dive, scared to go, live too far from large bodies of water or can't afford the cost.

Amphibian works on land without any water. First the "diver" gets positioned on a torso spring, and puts each arm and leg into sets of slings that attached to elastic bands. The elastic bands are connected to sliders that move along the simulator frame, providing underwater-like drag force. A cushion in the torso spring will inflate as the person breathes, sending the body up and down slightly.

Then the diver dons an Oculus Rift DK2 head-mounted display and headphones that simulate the muted sound of being underwater. Special sensing gloves change temperature with the diving depth, and give the wearer to the sensation of touching aquatic creatures or rocks. As the person swims, corresponding virtual hands appear in the field of vision. Bubbles rise upward.

Jain and his colleagues asked 12 experienced divers try out the simulator and offer feedback for a paper about it (abstract). Although the divers zeroed in on the system's limitations, some aspects received praise. "It felt like a diving mask," one said. "For any other sport, like tennis, it would be weird. But for diving, there's a nice analogy." Another responded that the "temperature was very good, very close to real diving." Amphibian is being presented at the ACM User Interface Software and Technology Symposium in Tokyo.

Misha Sra, Amphibian's developer-designer, explained in a Vimeo video about the tech that she has always been terrified of water but wanted to get a sense of what scuba diving truly felt like. She described how Jain's enthusiastic stories and videos from his trips made her wish she could go. "So I'm like, OK, maybe I can do it," Sra said.

As a kid I went snorkeling and saw amazing tropical fish - and a distant nurse shark - but developed asthma before scuba diving was ever a possibility. Initially I chuckled at Jain's simulator because the whole sling thing looked so involved. Now that I've seen all the careful immersive details, though, the experience would probably be a relaxing break. Maybe going on a "dive" will be the new 30-minute chair massage. 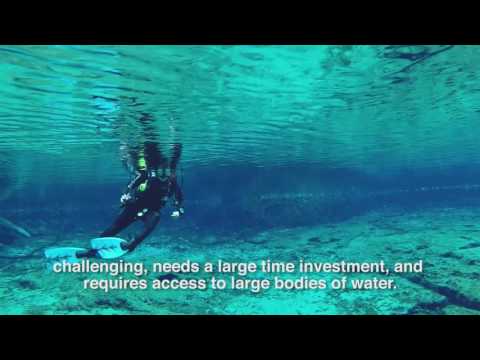