Rival construction crews go at with heavy machinery on a busy street in China. Continue reading →

The beauty of the viral video, as a cultural phenomenon, is that you never know what's coming next. To wit: The latest viral sensation making the rounds features six bulldozers battling it out on a busy street in China.

It's quite the sight. In the video, at least six heavy-duty construction bulldozers - technically front loaders - are seen slamming into one another on a commercial street in the northern Chinese city of Hebei.

At one point, a bulldozer is flipped completely on its side as the driver makes a narrow escape. Then another bulldozer tries to right its toppled comrade, presumably to rejoin the fight. Meanwhile, passenger vehicles scurry past the rapidly escalating urban chaos.

According the AP, the bulldozer brawl is the result of a conflict between two rival construction crews. Apparently, two companies were competing for business at the building site.

Such conflicts are a serious issue in China these days because business in the construction sector is down by two-thirds from its peak a decade ago. Massive waves of layoffs have led to intense competition that occasionally gets violent.

Officials say that no information on arrests or injuries will be disclosed until the investigation is complete.

Several versions of the video have been posted to YouTube, including this one below, which appends a second view of the incident and some images of the aftermath. Enjoy. 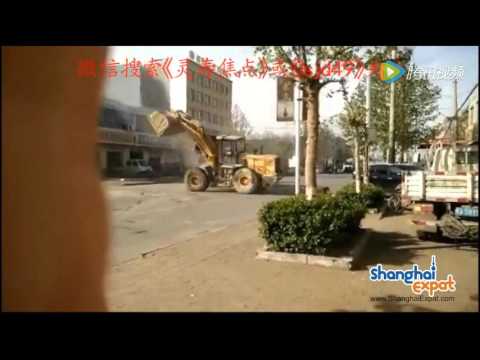