Freakishly long necks led to the evolution of the world’s largest dinosaurs, suggests a new video.

The world's biggest dinosaurs went from being tail-heavy to essentially all-over-heavy, shows new computer modeling that fleshed out the fossils of these enormous animals.

The evolution of freakishly long necks, with some stretching over 21 feet, seemed to drive the body changes, since these plant-eating dinosaurs needed to balance their bodies with their necks or else they would have tipped over. 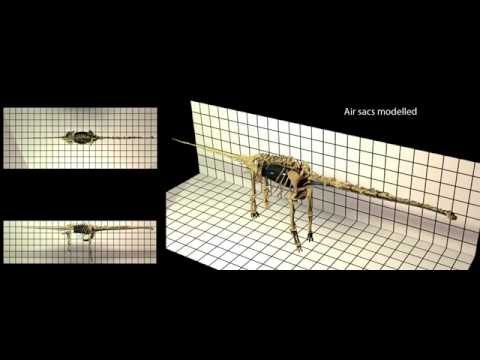 "As a result of devising these models we were able to ascertain that the relative size of sauropods' necks increased gradually over time, leading to animals that were increasingly more front-heavy relative to their ancestors," co-author Karl Bates from the University of Liverpool's Department of Musculoskeletal Biology said in a press release.

Bates and his team explained that the ancestors of these dinosaurs were small and walked on two legs. They had long tails, small chests and small forelimbs. According to the new research, published in the journal Royal Society Open Science, this body shape concentrated the dinos' weight close to the hip joint, which would have helped them to balance while walking on their hind legs.

Another Massive New Dinosaur Found, This Time in Africa

As time went on, the plant-eating dinosaurs gradually altered both their size and shape from this ancestral template. They became not only significantly larger and heavier, but they also gained a proportionally larger chest, forelimbs and the gigantic neck.

The new study did not address what drove the neck size increase, but earlier research suggests that the emergence of tall trees, ferns and other plants coincided with the shift. The long necks allowed the dinosaurs to feast on such foliage and additional plant materials that many other animals could not reach, providing them with a steady, reliable food source.

In fact, the dinosaurs did not evolve to handle much speedy movement. They must have moved their stocky legs toward their food sources, stretched out their necks and eaten for much of the day. Their tails could have whacked predators out of the way, and their sheer size must have intimidated many other animals.

These plant-eating dinosaurs, known as sauropods, evolved to become some of the largest ever creatures to have walked the earth. The biggest included beasts like titanosaurs, the truly massive Argentinosaurus, and Dreadnoughtus.

Co-author Philip Mannion from Imperial College London said of the new research: "These innovations in body shape might have been key to the success of titanosaurs, which were the only sauropod dinosaurs to survive until the end-Cretaceous mass extinction, 66 million years ago."

This recreation of Rinconsaurus next to a drawing of a human, shows how much larger many dinosaurs were.

model stands in front of the Senckenberg Museum, Germany.