Electric Eels Attack by Leaping Out of Water

When 19th century naturalist Alexander von Humboldt (1769–1859) reported 200 years ago that he witnessed electric eels attacking and killing horses no one really believed him, but now a new study finds that eels can wage such an attack on mammals, including possibly humans.

When eels encounter a partially submerged potential threat, they will often attack by raising up out of the water, pressing their chin against the individual's side and administering a series of powerful electrical shocks, according to study, published in the journal Proceedings of the National Academy of Sciences. 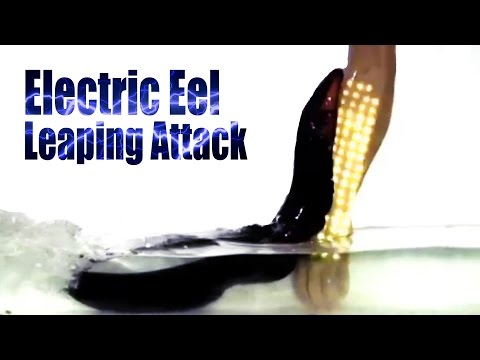 "The first time I read von Humboldt's tale, I thought it was completely bizarre," author Kenneth Catania, a Vanderbilt University biologist, said in a press release. "Why would the eels attack the horses instead of swimming away?"

Image: An historic illustration of Alexander von Humboldt's story of the battle between the horses and electric eels. Credit: Public domain

He found the answer to that question by accident, after using a net with a metal rim and handle to transfer electric eels that he kept in large lab tanks.

RELATED: How Do Eels Make Electricity?

"In hindsight, it probably wasn't the best design to use with electric eels," he said, but added that it was a serendipitous choice.

As he scooped up larger eels, Catania found that every so often, an eel would stop trying to evade the net and would attack it by leaping out of the water while pressing its chin to the handle, all the while generating a series of high-voltage pulses. Catania was wearing rubber gloves, so he didn't get shocked as all of this happened.

Curious about the "shocking leap" behavior, he devised a series of experiments to investigate the behavior further. An early observation was that eels ignore most things that do not conduct electricity, which makes sense because living things typically do conduct electricity.

He measured the nature and strength of the electric impulses the eels were producing as they leapt onto a fake target, and found that the voltage and the amperage produced by the eels increased dramatically as an eel moved ever higher.

WATCH: What Would Happen If All The Bees Die?

Catania explained that when an eel is fully submerged, its electrical pulses when fired are distributed throughout the water. When the eel's body extends out of the water, though, the path that the electric current travels goes from its chin directly into the target. From that point the electric current travels through the target until it can exit back into the water where it travels back to the eel's tail, completing the circuit.

"This allow the eels to deliver shocks with a maximum amount of power to partially submerged land animals that invade their territory," Catania said. "It also allows them to electrify a much larger portion of the invader's body."

The scientist went a step further with his research to visually illustrate the effect.

He covered a plastic arm and a plastic alligator head with a conductive metal strip and a network of LEDs that light up brightly whenever an eel attacks the fake targets.

"When you see the LEDs light up, think of them as the endings of pain nerves being stimulated. That will give you an idea of how effective these attacks can be," he said.

In their natural environment, where the threats are often real, the eels must contend with receding water in the Amazon basin during the dry season. This causes the eels to feel cornered when land-dwelling predators and others approach, making them more inclined to attack. During the rainy season, the eels' freedom of movement is not as restricted.

Catania thinks that the shocking leap method of attack evolved in stages. At first the eels probably just moved closer to their intended targets. They then would have figured out that making direct contact with intruders increased the power of their electric impulses, as would making contact above the water. Finally, the eels must have learned that the further up the target they go, the more power is directed to the threat.

Concerning von Humboldt, Catania said that "it seems reasonable to suggest that [he] observed a similar eel behavior on March 19th of 1800." On that day, according to the naturalist's dramatic account, electric eels attacked the horses, who lost their footing and drowned in less than 5 minutes.

Two groups of fish -- one in Africa (Mormyroids) and one in South America (Gymnotiforms) -- are the subject of a study in this week's Molecular Biology and Evolution that explores how their muscle cells evolved to produce electrical signals. The fish can locate objects and "talk" using electrical signals. These buzzy creatures are among a number of lifeforms that use electricity for offense or defense. Let's check them out. Above,

is an example of a weakly electric fish that is able to detect and locate electric fields.

Similar to electrostatic dust cloths, spider webs attract electrically charged prey. The electricity, in this case, is derived from flapping. The discovery, outlined in the the journal Scientific Reports, could help to explain how spider webs evolved. Light, flexible spider silk easily deforms in the wind and electrostatic charges to aid prey capture. Without this flexibility, the flying insect could just bounce off and zip on its way.

It doesn't take much imagination to understand what the electric eel is capable of given its name. The fish, which can grow up to more than 6 1/2 feet in length, uses electric shocks produced by two organs in their bodies, the Hunter's organ and the Sach's organ, to discharge upwards of 600 volts of electricity at one time, enough to stun prey or detour a potential predator.

PHOTOS: Animal Superpower -- The Eyes Have It

In a remarkable case of biological engineering, scientists confirmed that each tiny section of a bacteria found on the seafloor contains a bundle of insulated wires that leads an electric current from one end to the other. The bacteria are like living electrical cables. The discovery could lead to an entirely new class of organic electronics -- including devices that could be implanted in the human body.

Electric fields allow flowers to communicate with bumblebees and possibly other species, including humans. Bees have a positive electrical charge because they fly in air, which is full of all kinds of tiny particles, such as dust and charged molecules. When a bee lands on a flower, this generates its own electrical field, and therefore a force. It’s as though a mini spark results when the two connect. The flower, in turn, is electrically changed for a short period after the interaction. And the interaction may help the bee in future foraging.