City-slicker birds may have an intellectual wing up on their country counterparts, according to a new study of avian intelligence.

City-slicker birds may have an intellectual wing up on their country counterparts, according to a new study out of McGill University.

In a paper appearing now in the journal Behavioral Ecology, researchers present findings that show cognitive differences between urban-dwelling birds and those that live in more rural areas.

The birds in question were bullfinches (Loxigilla barbadensis) from both rural and urbanized settings on the Caribbean island of Barbados.

The researchers put the birds through two general kinds of tests: those assessing associative learning and those presenting problems to be solved, the latter considered more helpful to birds in their daily lives.

For problem-solving, the birds were rated for their ability in such areas as pulling open drawers to obtain food. You can see some of that avian acumen in action in the accompanying video, as an urbanized bird works out the best way to draw out some tasty treats. 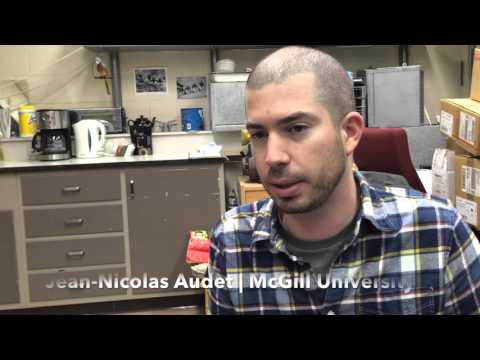 And the results? "We found that not only were birds from urbanized areas better at innovative problem-solving tasks than bullfinches from rural environments, but that, surprisingly, urban birds also had a better immunity than rural birds," said lead author Jean-Nicolas Audet in a statement.

The healthier immune system finding countered an assumption the scientists had made.

"Since urban birds were better at problem-solving," said Audet, "we expected that there would be a trade-off, and that the immunity would be lower, just because we assumed that you can't be good at everything. In fact, both traits are costly. It seems that in this case, the urban birds have it all."

VIDEO: Why Birds Are Always Flying Into Things

What accounts for the extra smarts of the urban birds?

The researchers said the city birds' adaptation to urban life left them better able to exploit new resources than the country birds. The urban birds were bolder than the country variety - no surprise, given they have to live among humans and sometimes need to come close to the large bipeds in order to snare snacks. (However, the city fliers had, strangely, a greater fear of unfamiliar things in their surroundings than did the rural birds.)

So, then, at least for the bullfinches of Barbados, street smarts trump country thinking.

Some birds have a flair for the funky when it comes to selecting where to build their nests, finds the

at the Cornell Lab of Ornithology. Now that spring nesting season is underway, don't be surprised if you find a nest in old boots left outside, on top of traffic signals, in gutters and downspouts and at many other surprising locations. This osprey, for example, unintentionally gave the female figure depicted by the statue a "hat." Underway right now is Cornell's "Funky Nests in Funky Places" contest, where entrants can submit photos, videos and more documenting oddly placed nests. "Many people, particularly those living in cities, are not aware of all the wild birds living in in their neighborhoods, believing they would only be found in faraway places," Cornell's Marta del Campo told Discovery News. The challenge, held every spring since 2009, was created to encourage people to discover the kinds of birds living and nesting in their neighborhoods, del Campo explained.

Birds Use Butts In Nests to Deter Parasites

Photos: Nests Made Out of Weird Materials

Hopefully the owner of this truck in Pennsylvania did not go for a drive for a while! Presumably, the truck had been stationary for quite some time, catching the eye of an industrious American robin seeking a sheltered space. If you find a nest, del Campo and her team urge that you leave it undisturbed. "Even if a nest has been built in a somewhat inconvenient place (for you), be patient," she said. "In a few weeks the birds will be gone. Meanwhile, you get a front-row seat to a wonder of nature. Do not provide food or get too close to the nest because this can attract predators and stress the bird, which might then abandon the nest."

A goose figurine became home sweet home to a real live bird, a common moorhen. "When birds are looking for a place to nest, they seek specific qualities, depending on the species," del Campo said. "For example, some bird species, such as woodpeckers and chickadees, look for cavities, while hawks like to build on flat surfaces in high places, such as window ledges on tall buildings that must seem like natural cliffs to them." As for the common moorhen, it must have liked its "room" with a view, not to mention the protection provided by the island-like figurine.

The owner of these motorcycle helmets must have been surprised when he found birds nesting in them. "Even in urban areas, we're a lot closer to birds than you might think," Celebrate Urban Birds project leader Karen Purcell said. "This contest is a lot of fun, but it's also about really being aware of what's around you and taking the time to appreciate birds and all of nature."

Neighbors passing by must have given this wreath with an apparent mourning dove "decoration" a second look when the bird actually moved. The dove may have been attracted by the natural materials of the wreath and decided to move in.

Perhaps the nursery rhyme about Old Mother Hubbard was inspired by a sight like this: a Carolina wren's nest in a golf shoe. "All birds are looking for a place where they can be safe from predators and where food and water are handy," del Campo said. "When you look at it that way, some of the 'weird' locations actually make some sense. A bird nesting in an old shoe in your garage will be protected from bad weather and out of view of predators."

By the size of this nest, Big Bird himself could have moved in. Del Campo and Purcell said that BBQ grills actually are fairly common as bird nesting spots. Around houses, birds might also construct their nests in potted plants, on and in light fixtures, on shrubs, atop balconies, under eaves, on doorsills and windowsills.

An American robin selected this urinal in Texas for its nest site. It appears to have been a good decision, based on the many healthy-looking chicks seen in this photo. This location might make Cornell's evolving "funkiest of the funky" list. As of now, the list also includes a great horned owl nest found in a laundry basket on a tree in Toronto, a mourning dove nest on a tombstone in New Orleans, and a European starling nest on retired V1 rockets at the Marshall Space Flight Center in Huntsville, Alabama.

This house sparrow nesting in a dinosaur's mouth seemingly has come full circle, since birds themselves are dinosaurs. (Scientists sometimes refer to dinos as "non-avian dinosaurs" to keep the two groups distinct.) Entries to the Funky Nests in Funky Places challenge are due by June 15, so there is plenty of time to seek out likely subjects. "We are looking for fun and interesting stories about the surprising nests people find in their neighborhoods," del Campo said, "but we do caution people, again, not to get too close to nests. We don't want any harm to come to the birds." Guidelines are at the