Still in the conceptual phase, this device would use a laser to heat the atmosphere, creating either a shield or a floating magnifying glass that could spy on enemy bases thousands of miles away.

We've all seen lasers blow up everything from starships on the silver screen to real-life little boats at sea. But some military experts want to build a laser system that can be used as both a deflector shield to protect airplanes, as well as a floating magnifying glass to spy on enemy bases thousands of miles away.

The Laser Developed Atmospheric Lens (LDAL), conceived of by UK-based contractor BAE Systems, and Rutherford Appleton Laboratory in England, would send out rapid, low pulses of energy to a point out in front of the airplane, heating up the atmosphere, or ionizing it, to create a shield against an attacking craft.

"The science is sound and this technology should be feasible," Nick Colosimo, global engineering fellow and futurist at BAE Systems, told Seeker.

"The most likely implementation would be reactive," Colosimo said. "You sense that you are being lazed, but before any catastrophic damage may occur, in a number of milliseconds, we've responded with this shield which is in the way of this adversary's laser beam."

The LDAL uses a high-pulsed-power laser system and exploits a physics phenomena called the 'Kerr Effect' to temporarily ionize or heat a small region of atmosphere in a structured way. Mirrors, glass lenses and structures like Fresnel zone plates could all be replicated using the atmosphere, allowing the physics of refraction, reflection and diffraction to be exploited, the company said.

To keep the shield activated, the plane-based laser has to send out a lot of signal. "We would need to constantly maintain these pulses," Colosimo said. "We envisage a system that is smaller than a dining table, that you could conceivably produce a shield that is bigger than a saloon car. Which is a reasonable size if you wish to put that atmospheric lens in the way of the atmosphere laser." 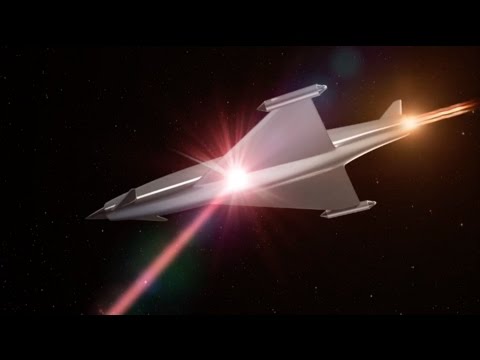 The same ionization effect of the atmosphere could be used to develop a focused mirror, he said.

"What we are going to do is to look at a distant scene and attempt to look at what is going on, like looking through a telescope or binoculars," he said. "The binoculars provide magnification, but also ensure we are collecting a lot of light from the scene and focusing it down to a relatively small sensor built inside our aircraft."

While this exotic use of laser technology may be a decade or two away, other types of laser weapons are being developed by the U.S. and European militaries. The US Army, Navy, Marines and Air Force have all come up with various mobile laser systems in recent years, and the Pentagon's research and development budget for lasers got a big boost in the most recent defense spending bill.

RELATED: The Pentagon Is Pouring $328 Billion Into High-Tech Laser Weapons

"Lasers are amazing versatile devices," said Loren Thompson, CEO and founder of the Lexington Institute, a military and technology think tank based in Northern Virginia. "You can use them for sensing, as weapons, for communicating and do a variety of more exotic things with them. The main challenge in any laser is developing a power source, shaping it into a beam and pointing it precisely."

Thompson said he believed that BAE Systems would be able to pull it off, given the company's expertise in building radar, radar jamming and sensing systems.

"It will probably lead to the development of novel applications of lasers," Thompson said.

Colosimo said the LDAL system is a concept and that BAE is in discussions on whether to build a prototype. A working model wouldn't be ready for a decade or more, he said.

WATCH VIDEO: Are Lasers the Weapons of the Future?