Twin Grey Seal Pups a First in the Wild

Two seal pups have been confirmed by DNA analysis as twins, the world's first recording of twin grey seals born in the wild, BBC reports.

The unprecedented duo was born last year on November 28, on Horsey Gap beach, near the English coastal town of Great Yarmouth in Norfolk.

From their birth, the new seals were watched closely by the conservation group Friends of Horsey Seals. In early December the pups were abandoned by their mother, who stopped feeding them.

The Horsey Seals group arranged for their rescue and transfer to the RSPCA Wildlife Hospital, where the pair currently resides.

Norway's Institute of Marine Research performed the DNA tests and said the pups were the first known instance of grey seal twins being born in the world.

"Our pups will go into the history books as being the very first twin grey seals ever recorded," said Friends of Horsey Seals' David Vyse, in a statement.

Vyse said the twins -- dubbed C3PO and R2Ds -- would likely by set free, back on Horsey Beach, later this month, the exact date yet to be determined.

The video below was captured by Youtuber and photographer Norfolk Images, which was lucky enough to be on hand just after the twins' birth: 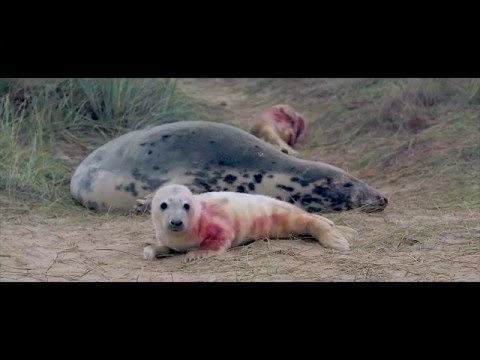 Soon after their entry into the world, the twin grey seals began to cause a stir, their area cordoned off to keep the public from getting too close.