Four orcas, including a baby, became trapped in shallow waters amid ice floes in Russia’s Sea of Okhotsk.

Four orcas, including a baby, became trapped amid ice floes in Russia's Sea of Okhotsk, sparking a challenging rescue mission.

RT reports it took a team from the Russian Emergencies Ministry about eight hours to save the animals, which are also called killer whales. The rescuers took boats out to meet the orcas and used hooks to push slabs of ice away from the giant creatures.

VIDEO: Whales Use Regional Dialects When Talking To Each Other

Larger ice slabs, meanwhile, proved too big for the hooks, so the team used an on-shore vehicle and a long rope to tow the heavier ice floes out of the path of the whales.

Once the ice was cleared enough to create a way out to sea, rescue workers dove into the frigid waters themselves to help guild the whales to open waters and renewed freedom.

The biggest whale was nearly 23 feet (7 meters) long, according to RT. The footage below shows the predicament in which the whales found themselves. 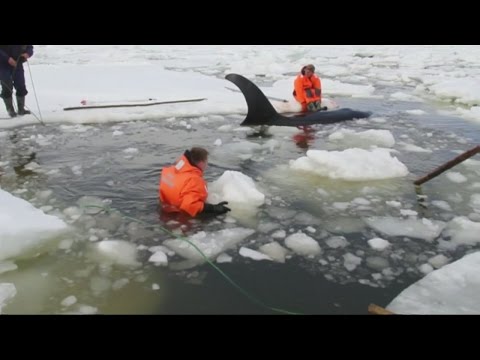 The world's oldest orca, affectionately known as "Granny" and an estimated 103 years old, paid a visit to the waters off Washington state on May 9 alongside her 25-member pod, "J-Pod." The sighting was a treat for the tour guests of Captain Simon Pidcock's Ocean EcoVentures. Pidcock took the chance to capture Granny in this series of photos.

The grand dame and J-Pod for the majority of the year patrol the waters between the north coast of British Columbia and Northern California.

Pidcock said Granny was instantly recognizable by her saddle patch, a white area whales have on their dorsal fins.

J-Pod was reportedly seen about one week earlier in an area off Northern California -- some 800 miles away from this appearance. This leaves whale watchers feeling confident about the shape Granny is in, if she can make such amazing journeys.

Granny's birth year designation of 1911 derives from her size, the size of her offspring, and comparison photos of the senior-citizen orca from as far back as the 1930s. She was caught once in 1967, but she was released because her age was a bit long in the tooth for sea park life. Who could have imagined that 47 years later she would still be alive and thriving?

Granny's 103 years are about twice the age of the oldest orca in captivity (Lolita, in the Miami Seaquarium, is 50). "It surprises people when they realize this whale was around before the Titanic sank. She's lived through fishing changes and live captures of whales. I would love to know what she thinks," said Pidcock. Photos courtesy of Simon Pidcock and