Edible Food Wrappers Made From Milk

After you're done with this transparent food wrapper, just eat it.

If you've ever peeled the protective wrapper off a store-bought cucumber to find a rotten, mushy mess, you know that plastic has its limits. Plus, all that food packaging doesn't really go away -- the waste clogs landfills.

In an effort to help us kick the plastic habit, researchers from the U.S. Department of Agriculture are working on a transparent, entirely edible wrapper made from milk protein.

Led by USDA researcher Peggy Tomasula, the new biodegradable and edible film is made with a milk protein called casein. Sorry, vegans. Although Tomasula and her team initially made a wrapper from pure casein, they found that it dissolved too quickly in water. By adding citrus pectin, they were able to make the material more resistant to humidity.

Casein-based films can do a much better job at keeping oxygen away from food than plastics, according to the USDA. Besides food wraps, the new material could be sprayed directly onto cereal to prevent sogginess. Currently sugar plays that role. The team also envisions using it for instant coffee or soup-mix pouches that could go into water as is, although the products would still need outer boxes for sanitary transport.

"The coatings applications for this product are endless," study co-leader Laetitia Bonnaillie said in a press release. "For instance, individually wrapped cheese sticks use a large proportion of plastic -- we would like to fix that." The USDA team is presenting their wrapper in Philadelphia at the National Meeting and Exposition of the American Chemical Society.

The rare times I've eaten any food packaging involved those edible rice paper wrappers that come around certain Asian candies. And they tasted about as good as eating thin paper sounds.

Although I like where the USDA researchers are headed, it's unclear where all that milk protein is going to come from. And milk isn't cheap, at least from a consumer perspective. Last month the average gallon of regular unleaded gasoline cost nearly $2.23, while a gallon of fresh whole fortified milk was $3.06, according to the Bureau of Labor Statistics.

In the meantime, here's a look at what the USDA is cooking up: 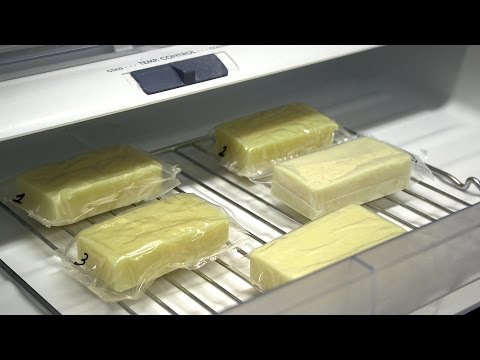