New data-collecting tools are allowing NASA to develop methods of tracking hurricanes and predicting where they might strike.

Scott Braun pulls up a big swirl of color overlaying a map of Florida on his laptop screen. It's Hurricane Matthew chugging up the Florida coastline, flirting with disaster alongside millions of coastal residents.

Braun adjusts his owlish spectacles and traces a red line across the map. It marks the zig-zag path of an unmanned drone that's probing the hurricane during a nine-hour mission.

"It was trying to pass over the storm, but there were some deep thunderstorms up to 60,000 feet," says Braun about the Global Hawk scientific aircraft. "They had to deviate around it and ended up doing this weird pattern."

Braun is inside the data visualization center at NASA Goddard Space Flight Center just outside Washington, DC. A bank of big video monitors display multi-colored maps of the storm. While forecasting Matthew's path is the job of meteorologists at NOAA's National Hurricane Center in Miami, Goddard is where scientists are asking big-picture questions.

For one: why did Hurricane Matthew jump from a Category 1 to a monster Category 5 story so suddenly last Friday?

Even though satellites, drones, airplanes and ocean-going drifters are giving Braun and others huge amounts of data, hurricanes remain a complex natural disaster to both predict and study in real-time. How hurricanes form, intensify and fall apart are still questions that need answers.

"When you are in the middle of an event its not always easy to figure out what you are going to learn from it," Braun said. "There's going to be a lot of people trying to figure out how this storm was able to intensify so rapidly given the appearance of unfavorable conditions."

Braun said that last Friday, forecasters predicted the hurricane's internal winds would pick up by 17 miles per hour. Instead, they increased by 63 miles per hour in one day.

"We are making progress collecting satellite and aircraft data is starting to shed light on it," Braun added. "Sometimes its difficult to tell what's cause and what's effect."

To figure out these mysteries, Braun and his colleagues are using a suite of new tools. In addition to the Global Hawk drone, which is based at Edwards Air Force Base in California, there are also human-operated hurricane hunter flights taking off from Tampa and Biloxi, Miss. Above the Earth, there's the Global Precipitation Measurement satellite (GPM), launched by NASA and the Japanese Space Agency in 2014, which can create a three-dimensional view of rainfall intensify inside the storm.

This video shows how the GPM's view of Matthew as it approaches Florida: 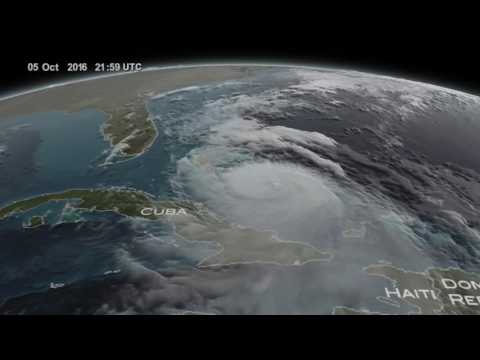 Predicting the amount, size and intensity of rainfall is Dalia Kirschbaum's job. She's an earth scientist at Goddard who works down the hall. Kirschbaum is a landslide specialist and she's trying to understand what happened in Haiti, where 20 inches of rain led to flooding and landslides have killed more than 800 people, according to reports Friday afternoon.

Kirschbaum collects data from two sensors on the satellite. One is a super-sensitive radar that works like an CAT scan to view the storm's structure. The second, a microwave imager, that is like an x-ray.

"It can tell you the difference between light rain, heavy rain and snow," Kirschbaum says. "We're able to tell how rainfall is accumulating in this storm."

Forecasting agencies and others also use GPM data to make predictive computer models of hurricane tracks, while Kirschbaum is helping predict rainfall damage to the East Coast of the United States.

Like anyone who loves technology, Kirschbaum and Braun are excited about the next device they can get their hands on (and answer their scientific questions). On Nov. 4, NASA along with its partner agency NOAA, will launch the GOES-R satellite into a stationary orbit above the U.S.

"We can take better pictures of hurricanes with GOES-R," Kirschbaum said. "And because we have a continuous view, we can see how these storms are moving much better."

If that's not enough, there's also a lightning sensor that will show the atmospheric sparks generated by the next big storm that lumbers out of the tropical Atlantic toward the U.S. mainland.