As NASA's Cassini mission completed its flyby of Titan on Oct. 29-30, it captured a series of observations revealing detailed changes in the Saturn moon's atmosphere. Of particular interest, over the 11 hour period, high-altitude methane clouds could be seen appearing, dissipating and drifting at a speed of between 14 to 22 miles per hour.

Titan is a small world in its own right, with its surface covered in seas and lakes of liquid methane and ethane, which drive the moon's thick atmosphere's methane cycle. Akin to Earth's water cycle, Titan sees methane evaporate from its seas, condense in its atmosphere and then rain down onto its hydrocarbon-rich surface, creating rivers that can be seen carving out channels and dramatic valleys.

Within these new observations, bright, low-altitude clouds can be seen slowly move between the northern lakes of Neagh Lacus and Punga Mare, adding a more detailed view of atmospheric processes from the surface to high altitude.

Observations assembled in this way allow mission scientists to create time-lapse videos, highlighting atmospheric dynamics while allowing them to distinguish between instrumental noise (like cosmic ray impacts to camera sensors) and real phenomena. In this short movie, it's the motion of methane clouds that take center stage: 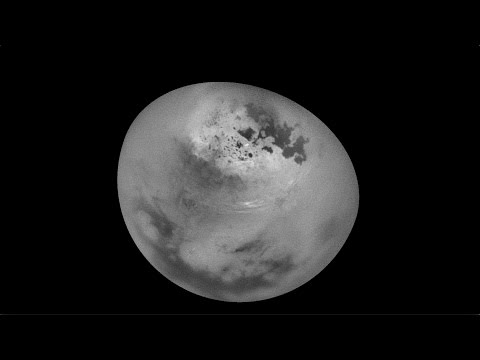 Although clouds of methane have been observed before, this is the first time such a detailed series of observations have been recorded, adding extra depth to our understanding of how Titan's complex atmosphere works. And as NASA admits, we still have a lot to learn.

"Models of Titan's climate have predicted more cloud activity during early northern summer than what Cassini has observed so far, suggesting that the current understanding of the giant moon's changing seasons is incomplete," the space agency wrote in a statement.

Although Cassini is in its final year of operations before its "Grand Finale" - taking the spacecraft into a polar orbit around the gas giant, allowing it to fly between the gaps in Saturn's rings, before burning up in the Saturnian atmosphere in September next year - it will continue to monitor Titan's atmosphere, monitoring how it changes over the coming months.