This Scoop of Mars Soil is Two Percent Water

By now, we probably all know that there was once significant quantities of water on the Martian surface and, although the red planet is bone dry by terrestrial standards, water persists as ice just below the surface to this day.

Now, according to a series of new papers published in the journal Science, NASA's Mars Science Laboratory rover Curiosity has found that the Mars topsoil is laced with surprisingly high quantities of the wet stuff.

Curiosity landed inside Gale Crater near the planet's equator on Aug. 6, 2012, with the explicit mission to seek out habitable environments for life, past and present. Using a sophisticated suite of instrumentation, the rover is gradually piecing together the geological and habitable history of its small corner of Mars.

During science operations at the geologically interesting location called "Rocknest," Curiosity scooped a sample of fine regolith (pictured top) and dumped it into its on-board chemical laboratory on Sol 71 (Oct. 17, 2012). After analyzing the very first scoop of material from a wind-blown ripple in the soil, it appears that Curiosity's Sample Analysis at Mars (SAM) had detected something quite profound.

"One of the most exciting results from this very first solid sample ingested by Curiosity is the high percentage of water in the soil," said Laurie Leshin, Dean of Science at the Rensselaer Polytechnic Institute, N.Y., and lead author of one of the studies focusing on SAM analysis of Mars ‘fines.' "About 2 percent of the soil on the surface of Mars is made up of water, which is a great resource, and interesting scientifically."

Scoop, Sieve, Cook Once scooped out of the ground by the rover's robotic arm-mounted scoop (called the Collection and Handling for In-Situ Martian Rock Analysis, or, simply, CHIMRA), a small amount of the powder was sieved and dropped into SAM where it was heated to 835 degrees Celsius (1,535 degrees Fahrenheit). SAM then used its gas chromotograph, mass spectrometer and tunable laser spectrometer to identify the chemicals contained within the sample and the ratios of the different isotopes of elements contained within.

When heated, the instrument detected the abundance of water plus significant quantities of carbon dioxide, oxygen and sulfur compounds, according to the researchers. Carbonate materials - compounds that form in the presence of water - were also identified.

The experiment confirmed the presence of oxygen- and chlorine-containing compounds - likely chlorates or perchlorates. Originally discovered by NASA's 2008 Phoenix Mars Lander (and likely detected by NASA's Viking landers in 1976), perchlorates were found in the soil of high-latitude arctic regions. This indicates that perchlorates occur globally over Mars.

Though highly toxic to human biology, some microbes are known to use the oxidizing chemical for energy. This finding intensified the debate over whether hypothetical microbes on Mars could metabolize perchlorates in a similar way.

Unraveling Mars' Chemical History "This work not only demonstrates that SAM is working beautifully on Mars, but also shows how SAM fits into Curiosity's powerful and comprehensive suite of scientific instruments," said Paul Mahaffy, principal investigator for SAM at NASA's Goddard Space Flight Center, Md. "By combining analyses of water and other volatiles from SAM with mineralogical, chemical, and geological data from Curiosity's other instruments, we have the most comprehensive information ever obtained on Martian surface fines. These data greatly advance our understanding of surface processes and the action of water on Mars." 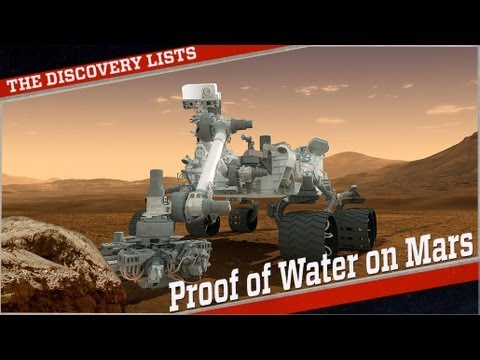 PHOTOS: Alien Robots That Left Their Mark on Mars

"This is the first solid sample that we've analyzed with the instruments on Curiosity," said Leshin. "It's the very first scoop of stuff that's been fed into the analytical suite. Although this is only the beginning of the story, what we've learned is substantial."

Analysis of the isotope ratios in the Rocknest fines revealed very similar ratios to the gases sampled in the atmosphere by Curiosity, indicating that surface material interacts heavily with the atmosphere.

"The isotopic ratios, including hydrogen-to-deuterium ratios and carbon isotopes, tend to support the idea that as the dust is moving around the planet, it's reacting with some of the gases from the atmosphere," said Leshin.

"Mars has kind of a global layer, a layer of surface soil that has been mixed and distributed by frequent dust storms. So a scoop of this stuff is basically a microscopic Mars rock collection," she said. "If you mix many grains of it together, you probably have an accurate picture of typical Martian crust. By learning about it in any one place, you're learning about the entire planet."

Another key target for SAM is organic compounds and, although the instrument appears to have detected some evidence of organic chemistry in this first soil sample, the detection is likely Earth-bound contamination. Besides, organic chemistry existing so close to the surface in a wind-blown sample isn't thought to be likely.

"We find that organics are not likely preserved in surface soils, which are exposed to harsh radiation and oxidants," said Leshin. "We didn't necessarily expect to find organic molecules in the surface fines, and this supports Curiosity's strategy of drilling into rocks to continue the search for organic compounds. Finding samples with a better chance of organic preservation is key."

The discovery of this surprising amount of water presents an interesting twist in our odyssey of Martian discovery, a fact not lost on the SAM researchers.

"We now know there should be abundant, easily accessible water on Mars," she added. "When we send people, they could scoop up the soil anywhere on the surface, heat it just a bit, and obtain water." 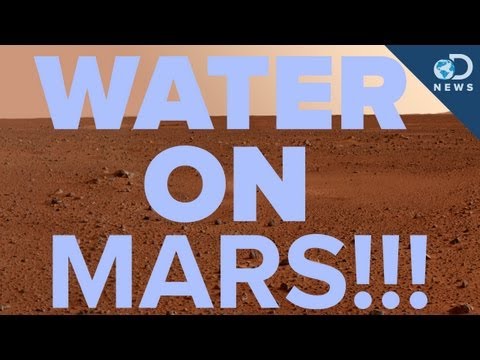 Image: The first scoop from Rocknest on Oct. 17, 2012. Credit: NASA/JPL-Caltech/MSSS

Since NASA's Mars Science Laboratory (MSL) rover Curiosity landed on the red planet, each sol (a Martian "day") of the mission sees a flood of new photographs from Aeolis Palus -- the plain inside Gale Crater where Curiosity landed on Aug. 5. In September 2012, mission controllers sent the command for Curiosity to flip open the dust cap in front of the robotic arm-mounted Mars Hand Lens Imager (MAHLI). Until that point, the semi-transparent dust cap only allowed MAHLI to make out fuzzy shapes -- although it did a great job imaging Curiosity's "head" and it is also famous for capturing Curiosity's first color photograph. But since the true clarity of MAHLI has been unleashed, we've been treated to some of the most high-resolution views of the rover, Martian landscape and, most importantly, we've seen exactly what MAHLI was designed to do: Look closely at Mars rocks and dirt, assembling geological evidence of potential past habitability of Mars.

Curiosity is armed with 17 cameras and MAHLI is designed to capture close-up photos of geological samples and formations as the rover explores. MAHLI was designed and built by Malin Space Science Systems and is analogous to a geologist's hand lens -- only a lot more sophisticated. Its high-resolution system can focus and magnify objects as small as 12.5 micrometers (that's smaller than the width of a human hair!). This photograph captured by the rover's Mastcam shows the MAHLI lens (with dust cap in place) in the center of the end of Curiosity's instrument-laden robotic arm.

To aid its studies, MAHLI is equipped with four LEDs to light up the imager's samples.

The first photograph to be returned from MAHLI without the dust cover in place was received on Sol 33 (Sept. 8) of Curiosity's mission. Shown here is a view of the ground immediately in front of the rover. Although this photo was a test, mission scientists were able to do a very preliminary study of the large "pebble" at the bottom of the picture: "Notice that the ground immediately around that pebble has less dust visible (more gravel exposed) than in other parts of the image. The presence of the pebble may have affected the wind in a way that preferentially removes dust from the surface around it," they wrote.

How Did Lincoln Help MAHLI?

On Sol 34 (Sept. 9), MAHLI was aimed at Curiosity's calibration target. This target is intended to color balance the instrument and provide a "standard" for mission scientists to refer to. The 1909 Lincoln penny was provided by MAHLI's principal investigatory Ken Edgett. Using a penny as a calibration target is a nod to geologists' tradition of placing a coin or some other object of known scale as a size reference in close-up photographs of rocks, says the MSL mission site.

Although MAHLI will be used to examine microscopic scales, it is showing its prowess at generating some spectacular high-definition views of the rover. Shown here is a mosaic of Curiosity's three left-side dusty wheels.

Hazard Avoidance Cameras, or Hazcams, have become "standard issue" for the last three rovers to land on Mars. Mounted on the front and back of rovers Opportunity, Spirit and Curiosity, these small cameras provide invaluable information about the terrain and potential hazards surrounding the rovers. These cameras are not scientific cameras -- they are engineering cameras. Shown here, MAHLI has imaged the four front Hazcams on Curiosity. Interestingly, it was these cameras who returned Curiosity's first dusty image after touch down in August.

Using the flexibility of the robotic arm, MAHLI was able to check the underside of Curiosity. As the camera can focus on objects from 0.8 inch (2.1 centimeters) to infinity, MAHLI has incredible versatility allowing mission controllers to focus on the very small features of Mars to checking the health of the rover to viewing the impressive vistas beyond.

In October 2012, the Internet was abuzz with speculation about a "mystery object" lying beneath the rover during digging operations at "Rocknest." Sadly, after studying the translucent object, mission scientists deduced that it wasn't anything native to the alien environment, it was actually a piece of plastic that had fallen from Curiosity. Yes, Curiosity is littering the red planet.

The MAHLI camera was very attentive while Curiosity dug trenches in the Mars soil at "Rocknest."

In early 2013, MAHLI snapped another curious photo. This time, after driving to a rocky outcrop at a location dubbed "Yellowknife," the camera picked out what appeared to be some kind of organic-looking object embedded in the rock. Nope, it's not a Mars "flower" -- more likely it's a concentration of minerals.

In what has become an iconic photo of Curiosity, MAHLI was commanded to capture dozens of high-resolution pictures of the rover. Like an "arms length" shot you may have in your Facebook profile, Curiosity did the same, composing a mosaic of pics taken with its outstretched robotic arm.

The Mars rover isn't only a scientific superstar, it also has a talent for cleaning. This circular pattern on a Mars rock was brushed aside by Curiosity's Dust Removal Tool (DRT), helping the rover carry out analysis of the rock surface beneath the layer of dirt.