This Is How Hawking Thinks

Can a 74-year-old theoretical physicist to remain playful? When thinking of Stephen Hawking, it's certainly possible.

Can a 74-year-old theoretical physicist to remain playful? When thinking of Stephen Hawking, it's certainly possible. He's a noted fan of "Star Trek" (he even cameoed in one of "The Next Generation" episodes) and was positively delighted when he got the chance to ride an airplane that simulates microgravity. Hawking has even co-written a few children's books.

Because Hawking works from a wheelchair and can move very little due to a progressive motor neuron disease, he does the majority of his scientific thinking in his head, said Ben Bowie, producer of a new PBS series that replicates Hawking's thinking through thought experiments.

Called "Genius by Stephen Hawking", the six-part series will air on Wednesdays from 8 p.m. to 10 p.m. EDT between May 18 and June 1. This follows on after several space series Bowie did in recent years, including a documentary called "Hawking" in 2013.

Bowie points out that many science documentaries show the viewer something and expect them to remember it. His approach is different; the series follows three volunteers who have to figure things out through thought experiments. Bowie declined to share specific results in an interview with Discovery News, saying he wants the viewers to try and think for themselves. But he hinted that one episode will explain the principles of evolution in part using trebuchets, a device that can catapult items over long distances.

"What we wanted to do was allow adults to play again, because through play you can learn," Bowie said. "Three volunteers together go through five challenges, mental and physical challenges, and by the end of it they should have realized something very profound about the universe and their world."

The six episodes include the themes "Can I travel in time?", "Are we alone?", "Why are we here?", "Where did the universe come from?", "What are we?" and "Where are we?" More exercises will be available on the PBS website for those who want to delve further into the topics, including interviews with subject matter experts. 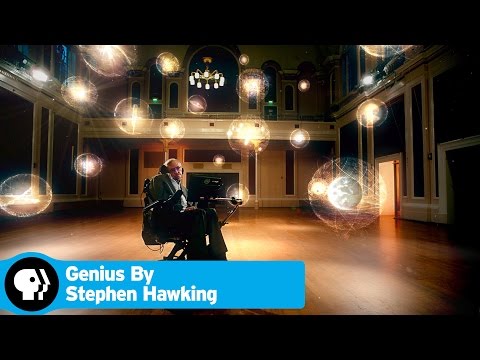 Stephen Hawking arrives for the the UK premiere of "The Theory of Everything" in Leicester square in London on Dec. 9, 2014.

February 11, 2016 will go down in history as the date humanity probed so deep into the fabric of spacetime that we finally gained the ability to detect gravitational waves. These extremely slight ripples were predicted by Einstein's theory of general relativity a century ago and have been sought after for decades, but in September 2015, after a significant sensitivity upgrade, the Laser Interferometer Gravitational-wave Observatory (LIGO) was finally able to detect the oscillations from a black hole merger some 1.3 billion light-years distant.

As February comes to an end, let's take a look back at this incredible month with a collection of photos from in and around the physics festivities.

Photo: A visualization of gravitational waves pictured during a press conference by the Max Planck Institute for Gravitational Physics (Albert Einstein Institute) at the Leibniz University in Hanover, Germany, Feb. 11, 2016.

Forming the basis of the historic gravitational wave detection is Albert Einstein's theories he presented at the Prussian Academy of Sciences in November 1915. In this photograph, the Head of Einstein Archives Roni Gross of the Hebrew University, Jerusalem, Israel, presents the original documents penned by Einstein outlining the theoretical basis for gravitational waves in his landmark theory: General Relativity.

100 years after Einstein developed his theories around the nature of spacetime, the international LIGO Science Collaboration restarted their search for gravitational waves after upgrading the twin LIGO stations located in Washington and Louisiana in September 2015. Almost immediately after the reboot, after searching since 2002, a signal was seen. Einstein's theories were (once again) confirmed, but the signal was much more -- for the first time we'd detected gravitational waves direct from a black hole collision. Shown here an aerial photograph of the LIGO Livingston Observatory in Louisiana.

Executive Director of the LIGO Laboratory at Caltech David Reitze is seen here discussing the details behind the gravitational wave discovery during the National Science Foundation's press conference in Washington, D.C. on Feb. 11, 2016.

The interferometer system that was key to the gravitational wave detection, forming the basis of LIGO was invented by Rainer Weiss, professor of physics emeritus at the Massachusetts Institute of Technology (MIT). At the Washington, D.C. announcement on Feb. 11, Weiss explained how the LIGO interferometers detected the tiny ripples in spacetime, using a plastic mesh to represent the "fabric" of spacetime. As gravitational waves propagate, they warp spacetime, as the physicist demonstrated by stretching the mesh.

GUIDE: What You Need to Know About Gravitational Waves

Theoretical physicist Kip Thorne, of Caltech (right) watches the discovery announcement with Weiss on Feb. 11. Thorne is co-founder of LIGO that commenced construction in 1994 and went online in 2002, using Weiss' interferometer to seek out gravitational waves.

MORE: We May Not Live in a Hologram After All

Beginning the next generation of gravitational wave detectors is the Europe-led eLISA project. To test key technologies of the super-sized space-based mission, LISA Pathfinder was launched last year (pictured here in the cleanroom before launch). It is hoped eLISA will launch by the mid 2030s. Physicists are keen to have many different observatories sensitive to different frequencies as many different gravitational wave-generating phenomena may then be discovered.