Leafy plants are miraculous self-sufficient factories capable of transforming solar energy into chemical energy through photosynthesis-code-could-help-feed-the-world-2099730683.html">photosynthesis. Since Giacomo Ciamician published his first photochemistry experiment in 1886, scientists have looked for a way to recreate photosynthesis. But they haven't been able to harness enough sunlight to make the conversion artificially.

Now, researchers at the Eindhoven University of Technology in The Netherlands have found a way to combine a technology that concentrates sunlight, called a luminescent solar concentrator (LSC), with very thin micro channels through which liquid can be pumped. The result is a tiny leaf-shaped generator that focuses sunlight on chemicals flowing through tiny channels at high enough intensity to generate the necessary chemical reactions.

"It mimics the processes that occurs in a tree leaf," Noel said. And, because of this, his team built the tiny generator to look like a maple leaf to "strengthen the analogy," - though the shape of the device doesn't matter to its function.

This breakthrough could make tiny, on-demand chemical factories possible anywhere in the world. Instead of building large factories to create chemicals in volume and shipping the product, drugs could be made in the location they're needed most. Anyone could feed the right elements into the leaf, expose it to sunlight and generate the chemical reaction that transforms those substances into the desired drug.

"Previous visible light photocatalytic reactions were slow when they were driven by solar energy," Timothy Noel, assistant professor at Eindhoven University of Technology, told Seeker. "But we can accelerate it to reaction times which are useful." Noel is the lead researcher on the project. 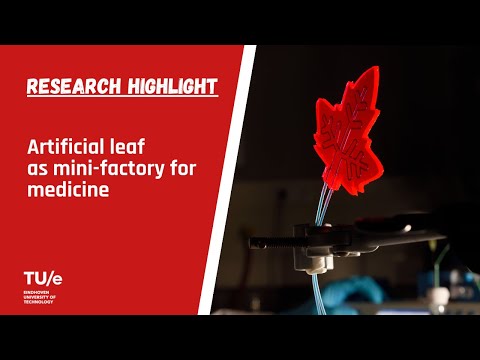 "Wherever you are on the planet, you might not always have access to a power grid," Noel explained. "But there is always some sun. With this device, you can harvest the sun's energy efficiently and use it to convert molecules into something useful."

Since the research team works and lives in the Netherlands, where sunny days are not an unlimited resource, they were particularly interested in creating a solution that worked even when there was not abundant sun light. At that, they succeeded.

"Even an experiment on a cloudy day demonstrated that the chemical production was 40 percent higher than in a similar experiment without LSC material," Noel said in a press release.

The industrial production of chemicals is often perceived as dirty and a contributor to pollution. But this solution is simple, portable, and clean. Instead of scaling production of a chemical reaction to a large factory to create a drug, it builds the necessary reaction into a small device that can be easily transported to where the elements are available and the chemical solution is needed.

"I also hope that our invention will help to make the chemical industry cleaner," Noel said. "And that it would alter the negative public perception of chemistry."

The leaf is pretty and illuminates slightly as a result of the chemical reaction. So perhaps it will even become a useful architectural design element. Natural beauty? That's something rarely hoped for in an industrial chemistry plant.

WATCH VIDEO: How Bionic Plants Will Change Everything!