This extra robotic drumming arm is so smart it can even improvise with a human. Continue reading →

Need an extra hand with that drum kit? Georgia Tech has you covered. Their smart, wearable robotic arm can turn drummers into cyborg super-musicians.

The 2-foot long arm goes over the shoulder and lets drummers play with a whopping three arms. Through sophisticated sensing, motion-capture technology, on-board motors and smart programming, the arm responds to human gestures and music in real time.

This smart arm was developed by Georgia Tech professor Gil Weinberg, who also directs the Center for Music Technology. You might remember his work for Atlanta drummer Jason Barnes, who lost his right arm below the elbow in an electrocution accident. Weinberg built him a robotic drumming arm with one stick that picks up electrical signals from upper arm muscles, and another stick that improvises. The prosthesis helped Barnes drum faster and better than ever.

The latest arm is not a replacement but a boost. "The machine learns how your body moves and can augment and complement your activity," Weinberg said in a Georgia Tech press release. "It becomes a part of you."

Turn Eggplant, Saucer, or Anything Into An Instrument

As soon as the drummer goes to play the hi-hat, the robotic arm moves over to the ride, and when the drummer switches to the snare, the arm goes for the toms, according to Georgia Tech. You speed up, so does the arm. You want some sweet improvisation, it can handle that.

Ever seen a real three-armed cyborg drummer? Here's your chance: 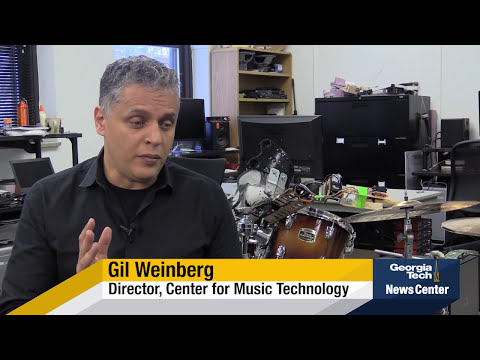 Beyond setting stages on fire with mad skills, similar robotic arms could lend a hand with other precise, intelligent work. Weinberg imagines technicians getting help running experiments or doing repairs.

He also pictures doctors using similar arms to bring over tools and even aid with surgeries. Well, more than robots already do. Seems like there's little left that robots can't pick up.

German photographer Martin Klimas' latest exhibition, a series of images he calls "Sonic Sculptures," is so explosive and colorful, it just may change the way you look -- yes, look -- at music.

For the project, Klimas put vibrantly colored paint on a diaphragm over a speaker, turned up the volume on selected music and snapped photos of what the New York Times Magazine described as "a 3-D take on Jackson Pollack."

"I use an ordinary speaker with a funnel-shaped protective membrane on top of it," he told the Smithsonian. "I pour paint colors onto the rubber membrane, and then I withdraw from the setup."

The above photo shows Prince's "Sign 'O' The Times."

Klimas' project was inspired by the research of Hans Jenny, a German physician, scientist and father of cymatics, which is the study of wave phenomena. Jenny photographed his experiments of the effects sound vibrations had on various materials such as fluids, powders and liquid paste. Jenny placed these substances on a rubber drum head and, as it vibrated, he found different tones produced different patterns in the materials. Low tones made powders assemble in straight lines, while deeper tones made for more complex patterns.

The above photo reflects Phillip Glass' "Music With Changing Parts."

Klimas used a variety of music -- everyone from Prince to James Brown and Charlie Parker to Phillip Glass. He says he leaves the "creation of the picture to the sound itself" and, after cranking the volume, steps back. Once the paint starts jumping, a sound-trigger device that detects noise spikes automatically takes photos.

"I mostly selected works that were particularly dynamic, and percussive," Klimas said. Though he used songs from a variety of music styles and eras, many of the tracks chosen were by musicians who had ties to the visual art world, such as the Velvet Underground and John Cage.

Before they struck gold with "Get Lucky," Daft Punk got dance floors thumping with "Around the World" shown here.

Klimas spent six months completing the project in his Dusseldorf studio and took about 1,000 shots to get his final 212 images. He went through 18.5 gallons of paint, on average of 6 ounces per shot, and blew two speakers while cranking the tunes. He used a Hasselblad camera with a shutter speed of 1/7000th a second.

The above image is a photo of Ornette Coleman's "Free Jazz, A Collective Improvisation."

Blown speakers and exactitudes aside, Klimas said "the most annoying thing was cleaning up the set thoroughly after every single shot." Check out more of Klimas' work on his website (www.martin-klimas.de), or better yet, if you're in New York City, stop by the Foley Gallery on the Lower East Side. There you can find his new exhibition, "SONIC," which opened earlier this month.

The above photo illustrates Pink Floyd's "On the Run."