These Students Are Building the Fastest Solar Car Ever

A team from Cal Poly aims to break the world record with a vehicle that runs directly off sun power — batteries not included.

Behold the spirit of American innovation: In a campus laboratory in San Luis Obispo, a team of 60 college students is working on the world's fastest solar car - a single-passenger speedster powered by ... a hair dryer.

Well, technically speaking, the solar car is powered by two kilowatts of electricity, about equal to a hair dryer. With this trickle of energy, students from California Polytechnic State University's Prototype Vehicles Laboratory have designed a car that should be able to earn a speeding ticket on many U.S. highways.

The electricity is generated by solar cells that will propel the car up to and past 65 mph, without the use of any batteries at all. If everything goes according to plan, next summer the team will attempt to smash the Guinness World Record - currently at 56.75 mph - for this kind of solar vehicle.

The Cal Poly team is one of several groups worldwide competing to build super-efficient solar vehicles, which they race in events like the exceedingly cool World Solar Challenge, held every other year in the Australian outback. Check out the event archives and you'll find that an impressively long list of universities, corporations and even high schools are developing these lean, mean solar racers.

The Cal Poly vehicle is particularly interesting in that it has no energy storage system whatsoever, said student project manager Will Sutton, in an email from the team headquarters – known as the PROVE Lab.

"The cells we're using are the same exact type of cells that you could get installed onto your roof," Sutton said. "The speed capabilities we've designed for are a combination of clever use of the cells and an extremely optimized aerodynamic design. Our vehicle is going to be one of the lowest-drag cars that's ever been built."

The project team includes students from a dozen different disciplines and areas of study. Aside from a sole faculty adviser, everything is handled by the students - from the initial design to the hands-on construction; the computer simulations to the fundraising and marketing. Mechanical components are machined on-site at the PROVE Lab.

WATCH VIDEO: Will Solar Power Be The Energy Miracle?

To keep the vehicle as light and strong as possible, designers are working with carbon fiber composites similar to those used on Formula One race cars.

"On a typical day, we've got people coming in and out of the lab for most of the day," Sutton said. "Usually there's some sort of construction going on – whether it's the suspension team or the outreach team working on their prototype. Our solar array team is soldering small practice arrays and testing different configurations. You'll usually find our aerodynamics team exploring fine-detail optimization of the shape, and our mechanical engineers planning out the manufacture of their parts."

Under the current design configurations, the composite body will be four times stronger than steel, yet so lightweight that two people can pick up the car to move it. The PROVE car will have just 11 pounds of aerodynamic drag at top speed, according to the designers. That's ten times less than a Ford F-150.

Sutton compared the experience to running a startup company: "I personally spend a lot of time doing systems oversight and interacting with current and potential industry partners," he said. "Never a dull moment ...."

So when the time comes to get the PROVE car out on the road and take a shot at the world record – who gets to drive?

"Somebody small and light!" Sutton said. "We have several candidates from within our team at the moment. All I can say for sure is that I am too tall to fit in the car." 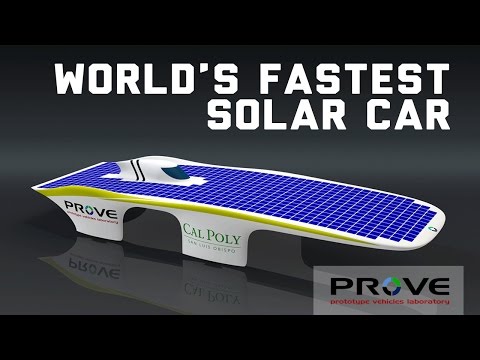