The Faces of Poaching: Photos

These famous animals are a stark reminder of the threat posed to many species by illegal hunting.

In July 2015, the death of Cecil the lion sent shockwaves across the world. The majestic Cecil first garnered international attention as part of an Oxford University project run by the Wildlife Conservation Research Unit (WildCRU). Since 2008, WildCRU tracked Cecil's movements in detail as he rose to dominance in Zimbabwe's Hwange National Park.

"He became dominant there for a long time, and at one point he had 22 lions under him, which is about as big as a pride ever gets in Hwange," lion researcher Brent Stapelkamp told The Telegraph in an interview.

National law protected Cecil from poaching within the confines of Hwange. A hunting party, however, allegedly lured the charismatic lion out of the park with fresh bait and wounded him with an arrow. After tracking Cecil for almost two more days, the party shot and killed him with a rifle.

By the time WildCRU researchers located Cecil's remains, only a headless skeleton was left.

"Cecil was a glorious male lion, with a fascinating family history as he maintained a large pride. Just a few months ago we were thrilled to watch him at close quarters in the field, and so his seemingly illegal death is heartbreaking," WildCRU Director David MacDonald said after Cecil's death.

"However, our goal is to learn from it. Good can come from this if the world's attention can lead to support for our work to improve lion conservation."

The regal Satao was the pride and joy of Kenya. At nearly 50 years old, the stoic elephant was the living embodiment of a fleeting reality that has since nearly slipped through mankind's hands. Thought to be among the tallest elephants in the country, Satao was an iconic "tusker," an elephant whose long tusks nearly scrape the ground as it walks.

To many, a tusker is a national treasure. To some, however, a tusker is a hefty paycheck: a pound of ivory can go for more than $1,500 on the black market. With 100-pound tusks that each measured over 6 feet, Satao's tusks could have easily fetched $250,000.

Well aware of the large bounty on his life, the Kenya Wildlife Service and the nonprofit Tsavo Trust monitored Satao nearly constantly from the ground and the air. In an area as vast as Kenya's Tsavo East National Park, however, even the most concerted anti-poaching efforts can come up short.

On June 2, 2014, wildlife officials spotted an elephant carcass near the park's borders. Authorities deduced that the animal had been killed by a poacher's poison arrow. However, with its tusks removed and its face mutated beyond recognition, the elephant was not immediately identifiable.

After more than a week of investigation, authorities confirmed the worst-case-scenario: in horrific fashion, the beloved Satao had fallen victim of the ivory trade.

During her time in the mountains of Rwanda, American zoologist Dian Fossey developed a special bond with Digit, a young mountain gorilla named for a damaged finger on his right hand.

Their relationship, however, came to a frightening end on New Year's Eve 1977. As a group of poachers descended upon Digit's group, the fearless creature sacrificed himself for the greater good, sustaining several spear wounds and fighting to the death so that his companions could escape unharmed.

Koko The Gorilla Still A Wonder At 44: Photos

Poachers decapitated Digit and removed his hands -- in some cultures, gorilla hands are valued as collectible ashtrays.

Digit did not, however, die in vain. Fossey and her associates were eventually able to capture six of Digit's killers, three of whom were convicted and imprisoned. To honor the legacy of her beloved friend, Fossey established the Digit Fund (now known as the Dian Fossey Gorilla Fund International) to fight gorilla poaching.

Tragically, Fossey herself was murdered several years later. Although authorities were never able to determine the motive behind Fossey's killing, many believe that her death was tied to her anti-poaching activism.

After a harrowing 2013 massacre in which poachers reportedly gunned down more than 100 elephants, one survivor was left standing: a nine-month-old elephant who would come to be known as Max.

After locals attempted to care for the resilient creature, American nurse Gary Roberts assumed custody of Max, who was traumatized and badly injured. In an attempt to nourish the despondent elephant, locals had fed him cow's milk, which is toxic to elephants and caused severe diarrhea.

A registered pilot, Roberts loaded Max into a small airplane to begin the journey to his wildlife sanctuary for treatment. Heartwarming video shot in the air depicts the touching interactions between the pilot and his passenger: 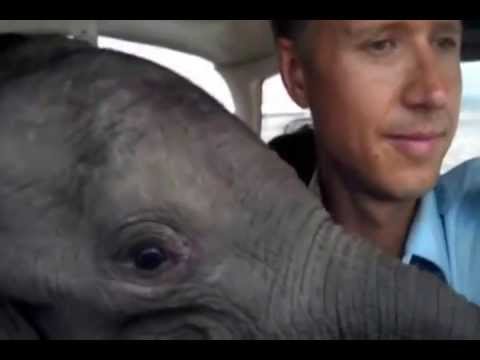 For every animal that had its own name and story, poachers kill countless more creatures whose only encounter with humankind results in their death:

In South Africa, a rhino is killed on average Across Africa, nearly In a single region of the Republic of Congo, the bushmeat trade claims the lives of more than Due to a variety of factors, many lion populations across Africa are expected to Annually, approximately Tigers are highly valued for their skin and bones; the majestic creature's numbers have dropped nearly Click here to find out how you can #StartWith1Thing and take a stand against wildlife trafficking.

On Wednesday, December 2nd, Discovery will present a global broadcast of Racing Extinction, a powerful eco-thriller that exposes issues of endangered species and mass extinction. Visit RacingExtinction.com for more information.