Underwater footage reveals a fiery new species that was previously known only from a handful of museum specimens.

The mysterious Ruby seadragon, a new species known only from a handful of museum specimens, has been seen for the first time in the wild.

Scientists from the University of California San Diego (UC) and the Western Australia (WA) Museum went looking for the creature in waters off western Australia and hit a biological home run: almost 30 minutes of video (see below) featuring two Ruby seadragons.

The creature has only been known since early in 2015, when researchers confirmed the animal as a third seadragon species (joining the Common and Leafy varieties). That identification was made from CT scans of a small group of specimens – one of which a century old – previously thought to have been those of Common seadragons.

Seadragons are marine fish in the same taxonomic family as pipefish and seahorses. They live off Australia's coast, among reefs and beds of seaweed, dining on zooplankton and very small crustaceans.

The fiery new animal stands in visually stark contrast to the orange-tinted Leafy sundragon and the yellow/purple Common, and that's not the only difference, the researchers found.

Thanks to the video footage, researchers now know for sure that Ruby seadragon doesn't have the leaf-like appendages common to the other two species. The missing feature was documented in the CT scans of the earlier specimens, but before the live footage there was no way of knowing if this was how Ruby seadragons really looked or if the appendages had somehow been lost during collection.

"It never occurred to me that a seadragon could lack appendages, because they are characterized by their beautiful camouflage leaves," said Josefin Stiller, co-author of a study documenting the find in the journal Marine Biodiversity Records, in a statement.

The Common and Leafy seadragons use the appendages for camouflage among seaweed, and researchers suspect the Ruby red version uses its color as camouflage instead: They think the creature inhabits deeper waters than its cousins, at depths where the red shading would be absorbed and serve as its own camouflage. 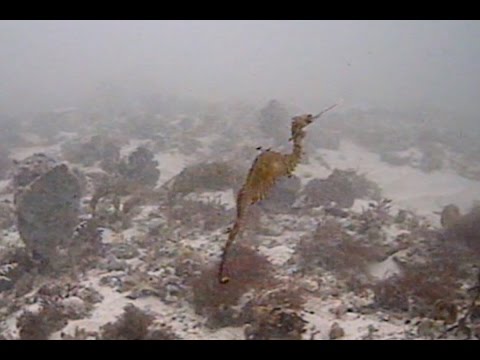 The UC and WA team also learned from the video that the Ruby seadragon has a curved tail – just like seahorses or pipefish. That feature isn't seen in the other two seadragon species, and the scientists think the Ruby uses it to hang on tight to objects in its midst in the strong currents where it lives. (The scientists say they'll need more research to figure out why the Ruby has a curly tail while the other seadragons may have lost theirs.)

"Until last year, no one had ever suspected a third species of seadragon existed," marveled study co-author Greg Rouse. Rouse and his colleagues recommend that the Ruby seadragon receive protected wildlife status as soon as possible.