The Astonishing Simplicity of Everything: Perimeter Institute LIVE

Tonight at 7 p.m. ET, The Perimeter Institute will be hosting a special lecture by theoretical physicist Neil Turok, who will explain why, actually, our universe has the simplest geometry of anything we know. Streamed LIVE.

Fundamental physics has reached a turning point. The most powerful experiments ever devised are revealing the structure of the universe with unprecedented clarity. On the largest scales - the whole visible universe - and the tiniest, we are discovering remarkable simplicity, which our theories do not yet explain. In between, things are complex. But here too, new technologies are allowing us to access the quantum frontier, opening up new high-precision probes of the fundamental laws of nature and revolutionary new technologies. We stand on the threshold of breakthroughs, both theoretical and experimental, which could change our picture of the world and the development of our society. - The Perimeter Institute

Tonight at 7pm ET, the Perimeter Institute of Theoretical Physics, in Waterloo, Ontario, will kick off its new season of public lectures and once again, Discovery News will be streaming the event live. Tonight, the Director of Perimeter and theoretical physicist Neil Turok will delve into the "simplicity" of the Universe and how some of the biggest mysteries could be explained through a revolution in physics thinking.

Be sure to tune in!

Watch the live feed here, you can also interact with Perimeter physicists who will be answering questions via Twitter using the hashtag #piLIVE 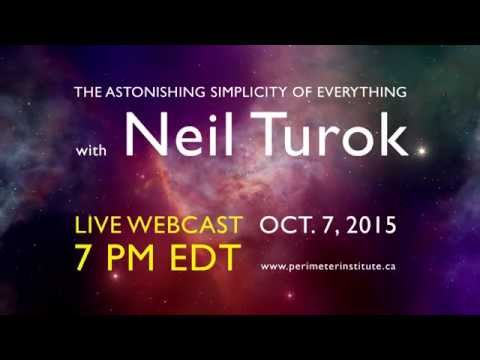