A strange creature is said to have been filmed in the Thames river. Continue reading →

A video claimed to depict some sort of unknown monster or mysterious object in the Thames river has gone viral this week.

The video was posted to YouTube on March 27, shortly before April Fool's Day. The brief and blurry video (see below) from a cameraphone shows the Thames river from a tourist cable car, and what seems to be at least two dark humps in the water before the cameraman inexplicably turns the camera away, and then back again but the humps are gone.

Various theories have been put forward, ranging from a Russian submarine to a crude hoax to a (very) lost Loch Ness monster. So far the truth remains elusive and there are more questions than answers, beginning with the video's source.

Who allegedly filmed this startling video? According to "The Daily Beast," it's a "Penn Plate," (perhaps a pen name) who "has only uploaded two YouTube videos, both on the same day. His profile displays no photograph, no email, and no identifying information other than his username, which does not appear to match any other social media handles.

Penn has, however, licensed the video to Newsflare, an online video company that purchases rights to photos and videos, and sells them to news organizations. The videos' original owners get a cut of the profits." 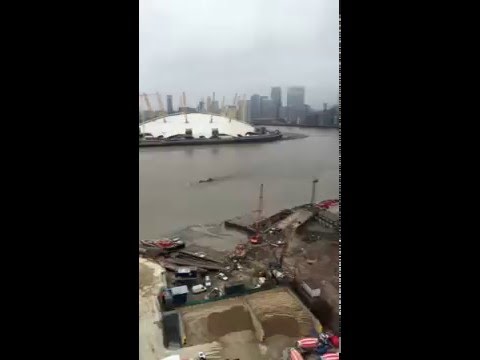 The camerawork, as it might generously be described, also casts some doubt on the film's authenticity. It is strange, for example, that "Penn Plate" chooses to move the camera away from the "creature" moments after it is in frame. You might expect someone who captures such a startling sight to keep the camera trained on the mysterious object as long as it's in sight instead of panning away from the water, as he chooses to do.

The lack of other people's reactions is also curious; judging from a bit of audio in the background he doesn't seem to be alone, and you might expect someone else to have sighted the spectacle, or even photographed or made a video of it.

Yet not only has no one else with him come forward in the past two weeks with another photo or video, but it seems that no one even mentioned it to the press or anyone else-even to this day, the only "account" being the video itself.

If what's depicted in the video is in fact alive - and not, for example, only residing as a video effects file on a desktop somewhere - it's unlikely to be a single enormous creature, as it appears to be in the video. Instead it's more likely to be two smaller animals traveling together, one in front of the other but creating the illusion of one long, multi-humped serpentine form.

Researcher Loren Coleman, Director of the International Cryptozoology Museum in Portland, Maine, told Discovery News, "When investigating videos such as this one we [at the museum] start with the circumstances of who took the footage, why, when, and so forth. The answers here all appear to be innocent enough, but why the excitement? There are several mundane explanations for this one, and nothing ‘monstrous' is needed for solving this case.

Last year, the U.K. media reported that more than 2,000 seals and 450 porpoises and dolphins were spotted in the Thames over the last decade. This seems to be at least a pair of dolphins swimming in the gray waters of the Thames."

Indeed, Coleman may be right: a Thames Marine Mammal Sightings Survey conducted by the Zoological Society of London collected over 1,200 sightings of marine mammals in the river over the course of a decade, the vast majority of them harbor and grey seals, which can grow quite large.

So is the video of a hoax or known animals? Either explanation seems plausible, and the video is too poor quality to decide the matter. Until and unless more information is known about the circumstances of the video (including the videographer and what others saw) the two most likely options suggest that there is no wayward river monster in the Thames.

We all enjoy a tall tale. Cultures with seafaring traditions are especially ripe in what seem like the tallest sea monster tales of all: hydra, kraken, sirens, scylla, leviathans, assorted serpents and mermaids. Usually the stories are never confirmed and deemed baseless. Then again, some of the tales are based on something. With our skeptical hats on, let's have a look at sea monsters both real and fanciful. We begin with a story that went viral just this week, about a supposed monster that revealed itself during a swim in the Thames River. A

bump in the water, filmed from overhead, started it all. But you'll have to judge for yourself: Real or fake? Watch the video and read

In keeping with our subject of monsters of the deep, we also learned this week that at least

really can, and will, use their heads for ramming -- just as the fictional Moby Dick did, in the Herman Melville classic of the same name. Did whales perfect the head-butt long before people started banging heads?

Real Moby Dick: Some Whales Ram With Their Heads

Sea monsters are truly global, of course. This one from Japan serves as the villain for the classic maiden in distress, who awaits rescue by her hero. The poor monsters are almost always cast as the bad guys. And so they usually end hacked to pieces; fish food. But is there any truth behind these sea serpent tales?

Maybe it's the oarfish. It looks too monstrous to be true. It can grow many meters long, has strikingly bright silver scales, scarlet fins and some ornate headgear that more than explains why some call it a roosterfish. If only it were a reptile, it'd be a true sea serpent. Alas. It is a fish. A very weird and beautiful fish, but still a fish.

Is the Loch Ness Monster Dead?

There are also other, newfound "sea serpents" our sea-going ancestors never imagined. This one was spotted by a satellite coiling off the south coast of Japan's Hokkaido island. What do we know about it? 1) It's arguably one of the largest organisms on Earth, 2) It swallows ships, engulfs islands and generally does what it wants, and 3) We're darned lucky it's made of plankton.

Research into such massive blooms and the individual plankton cells that comprise them has revealed surprising cooperation among the microorganisms. They appear to operate like more than just floating individual cells. They live and die for the greater good, it seems. So they may be, in fact, a gigantic watery superorganism. Now that's a cool monster for you: You can swim in it and never know you've been in the belly of a beast.

VIDEO: Why Squid Are Terror Monsters Of The Sea

Mermaids and mermen have always been the stuff of fantasy. Where did the fantasies come from? There are some standard answers to this question, which have always seemed rather inadequate. For instance ... (next slide, if you please) ...

Mermaids Exist! And They Are Seismically Sensitive

The manatee has often been called the source of mermaid myths. It's a mammal, so it breathes air. But who would ever mistake a manatee for a sleek and beautiful mermaid? Could it be love-starved sailors with poor eyesight? There was no shortage of these fellows in the days before optometrists.

Another possibility is that merfolk were inspired by fish with roughly human-looking faces, like this fellow. Some fish can look humanoid. That would be enough to get superstitious sailors started.

How about giant, ship-destroying squid and octopi? These monsters were old hat even to the easily freaked-out. Most folks figured they were historical exaggerations. That's until some very large and unusual squids started washing up or being hauled in by marine biologists in recent years. Colossal squid are meters long, pretty amazing beasts. Still, they have never been known to lift ships out of the water. And since were on the topic of squids ...

Do you remember when this one hit the headlines? It's not so gigantic, at four meters long, but it was observed 3,380 meters down in the Pacific Ocean near Oahu. It's pretty big to have gone unseen before its May 2001 discovery. So what else is out there? It's pretty clear marine biologists have only just begun discovering what lives in the deep sea. The more time they spend searching, the more they will find. But none would dispute that the nastiest sea monster to ever rise out of the sea is ... (drum roll please) ...

You might have guessed it: Human garbage. Yep. It's the ugliest, most alien-looking, fatal and pervasive monster in the seas. Garbage patches have been getting a lot of attention lately. These are areas on the seas where currents and winds tend to concentrate floating garbage.