Tesla Unveils Home Battery to Get You Off the Grid

The Tesla Powerwall can store power from solar panels, from the electricity grid at night when it is typically cheaper, and provide a secure backup in the case of a power outage.

Supercharged! Battery Power For The Future

In theory the device, which typically would fit on the wall of a garage or inside a house, could make solar-powered homes completely independent of the traditional energy grid.

"The goal is complete transformation of the entire energy infrastructure of the world, to completely sustainable zero carbon," Musk told reporters shortly before unveiling the Powerwall in a stylish warehouse space outside Los Angeles.

Examples of the sleak device -- available in a range of colors -- were lined up along one side of the hall. "It looks like a beautiful sculpture on the wall," said Musk.

All the power for the evening demonstration, attended by several hundred media as well as tech world participants, came from his new batteries, hooked up to solar panels on the roof, he said.

Initially the device, which will cost $3,500, will go on sale in the United States later this year. But the aim is to roll it out internationally some time next year.

Germany is seen as a key market for the product -- which is about 6 inches thick, 4 feet tall and 3 feet across -- because it has among the highest take-up of solar energy in the world, Musk said.

But it could also be a huge boon for under-developed regions, where power is often unreliable at best, despite abundant solar energy -- and he compared the potential to that of the way cellphone technology has expanded.

"It's analogous to the way mobile leap-frogged landlines," Musk said.

"This is going to be really great for the poorest communities in the world," he said. "This allows you to be completely off grid."

Supercharged! Battery Power For The Future

Musk stressed however that moving advanced economies like America away from unsustainable fossil fuels was a key goal.

"I think we should collectively do something about this .. we have this handy fusion reactor in the sky, called the sun," he said.

The Powerwall comes in 10 kWh weekly cycle and 7 kWh daily cycle models, both of which are guaranteed for 10 years and are sufficient to power most homes during peak evening hours.

The Tesla chief was coy when asked whether Tesla Energy would be a bigger business than Tesla Motors, for which he is best known. He dodged the question.

Tesla will run operations while its Japanese partner will make battery cells destined for the plant and invest in equipment and machinery, according to a joint statement released at that time.

While Tesla produces relatively few vehicles, it has become a star in the sector due to keen demand and a reputation for high quality. See the press announcement below. 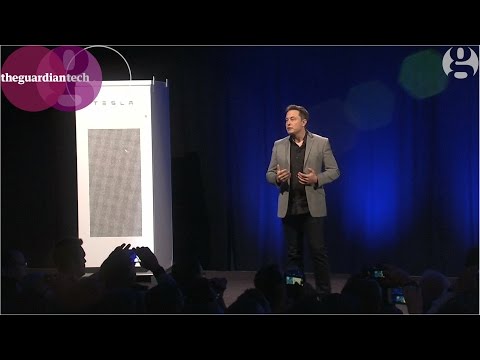 What do smart phones, electric vehicles and solar panels have in common? They all demand more and more battery power to keep our homes, jobs and vehicles running. Lithium ion is still the "gold standard," but researchers are looking at the entire periodic table for new combinations of elements that can conduct and store electrons in smarter ways. And the sooner they find it, the sooner society can get off fossil fuels and use more sustainable energy sources. “With the combination of new materials, new design concepts, and new production and manufacturing methodologies, I believe we will get there,” said Esther Takeuchim, professor of advanced power systems at SUNY Buffalo, Here’s a look at five new battery techs – some ready for market in the next year, others just over the horizon:

Lithium Imide When Leyden Energy’s Noam Kedem was at the Consumer Electronics Show in Las Vegas earlier this month, he was struck by the fact that almost nobody could talk on the phone after 3 p.m. "Everyone was running from charger to charger," Kedem said. To meet the demand for more power and longer life, Fremont, Calif.,-based Leyden is using a unique electrolyte salt solution with existing lithium ion technology. Kedem says that doubles the number of laptop or cellphone battery charges from 350 cycles to more than 800. Kedem says their batteries can also operate up to 140 degrees Fahrenheit without producing hydrofluoric acid or the swelling that can occur when batteries heat up as they run multiple applications. Canada’s Dr. Battery retailer began selling Leyden’s first rechargeable battery pack, and the firm is beginning mass production of tablet and cellphone batteries this year. Kedem says the firm is testing a prototype electric vehicle battery using the same electrolyte platform.

Sodium Ion Pittsburgh-based Aquion Energy is betting on simple, non-toxic materials for their grid storage battery system. "It’s made out saltwater, cotton, charcoal and dirt, actually lithium manganese oxide," said Ted Wiley, Aquion’s vice president of business development. "Everything we're made out of is cheap and staying cheap." Aquion is building shipping-container-size storage cells for solar, wind and other renewable energy producers who need to store the electricity they make before selling it to the grid. It’s a hybrid battery using the food preservative, sodium sulfate, and is based on research coming out of Carnegie Mellon University’s school of engineering. This simple and inexpensive concept should also work to augment diesel generators in remote areas, Wiley said, or back up the power supply of homes and businesses.

Solid State Lithium Ion For electric vehicles, weight, range and safety are the big concerns. One idea is using solid state technology that doesn’t have a liquid electrolyte solution for a lithium-ion fuel cell. "That gives our cells greater energy density and also potentially reduces system complexity dramatically,” said Ann Marie Sastry, CEO of Ann Arbor-based Sakti3. The firm's batteries pack more power into less space, said Sastry, a University of Michigan professor of materials science and engineering. There's no flammable material either, something that’s recently plagued the Chevy Volt’s battery. GM and Khosla Ventures are backing Sakti3’s research and development efforts. Meanwhile in Japan, Toyota announced recently that its own solid state battery with a 600-mile range will be ready for roll-out sometime around 2015.

Lithium Air One materials scientist told me that lithium air is the "grand slam home run" of energy density. Lithium-air batteries differ from lithium-ion batteries in that they use carbon for their positive electrode instead of metal oxides. Carbon is lighter and reacts with oxygen in the surrounding air to produce electrical current. Although it promises a 1,000-mile range instead of just 125 miles for electric vehicles, lithium air batteries have also proven to be unstable. The big problem is that lithium ignites when it contacts moist air. But IBM researchers in California and Switzerland reported this month that they have solved a key problem in the battery’s electrochemistry by finding a different kind of electrolyte solution. IBM hopes to have a prototype lithium-air battery by 2013. Startups like Berkeley-based PolyPlus are also hunting for this "holy grail" of battery tech. Critics say that lithium-air research has been underway for two decades without complete success.

Magnesium Ion Some researchers are looking beyond lithium. The Department of Energy’s Advanced Research Projects Agency for Energy (ARPA-E) is funding high-risk, high-reward technology, such as the magnesium ion battery being developed at Pellion Technologies, an MIT spin-off. Pellion says its batteries will have twice the energy density as existing lithium-ion batteries for both consumer products and electric vehicles. At the same time, Toyota researchers in Michigan say they are developing their own magnesium battery for an EV that can run twice the distance as current batteries on a single charge, but don’t expect it until 2020. The race is on.