Tech-sector veteran Alex Lidow is on a mission to end the reliance on power cords to operate your electronic devices.

“Nobody likes power cords," said Alex Lidow, CEO of Efficient Power Conversion (EFC). And have truer words ever been spoken?

Lidow's company specializes in power management technology, selling gallium nitride (GaN) transistors, which have gained traction in recent years as an alternative to silicon-based products. GaN has several technical advantages over silicon and is already being used in next-generation technologies, like virtual-reality helmets, self-driving cars, and even electronic colonoscopy pills.

As impressive as those innovations might be, with the help of Lidow, we may soon be living in a world with no power cords at all. No overburdened wall outlets. No tangles of cables behind the TV.

According to Lidow, his EPC engineers have developed a tabletop wireless power transfer system that can power any electronic device placed upon its surface. The system uses magnetic resonance technology to send electricity wirelessly to laptops, phones, table lamps, televisions — anything that would otherwise require a plug.

The EPC system works by generating a discrete magnetic field that rises to a height of about two inches above the surface of a connected table or desk. Transmitters just under the surface pair with receivers in the base of a device. This way, instead of plugging in a half dozen different devices, you just need to plug in the desk.

While magnetic resonance power has been available to consumers for a while in specialty items — Dell manufactures a magnetically charged laptop, for example — no one has yet developed a way to power multiple devices on a large surface.

“Wireless power has been around for a hundred years, but it's never really taken off in a broad way,” Lidow said, speaking from his offices in El Sigundo, Calif. “The goal of EPC is to create a wireless power system, using magnetic resonance technology, that conforms with existing standards. Specifically, we want to power large surfaces safely and efficiently.” 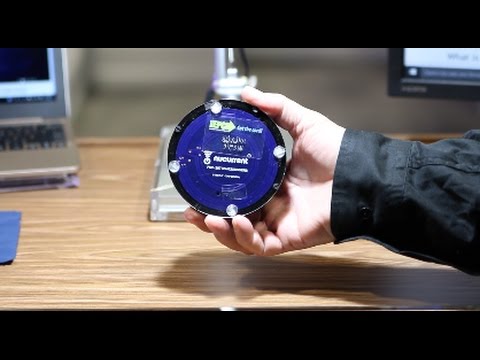 Sounds good, but there are significant roadblocks ahead. For one thing, your devices would need to be built with base receivers or otherwise retrofitted to work with a magnetic resonance power source. That can be done — and done cheaply, Lidow said — but it's going to require time, effort, and partnerships. In a recent demo video, Lidow shows a series of devices fitted with EPC antennae, including an LED desk lamp, a computer monitor, and an Amazon Echo, demonstrating the ease with which currently available devices could be retrofitted.

Another problem with magnetic resonance systems is, when you run several devices in close proximity, the resonant fields tend to interfere with one another. Lidow said his company has resolved that problem. But he wouldn’t offer details, citing concerns about tipping off potential competitors.

“When you change the electrical load, the resonance changes,” he said. “Your monitor might need 50 watts, your computer is 30 watts, the cell phone is 15 watts. That's not an issue for us. It's power on demand.”

RELATED: Cracked Cell Phone Screens Could Soon Be a Thing of the Past

The EPC system can be deployed vertically as well as horizontally — another plus for the technology. The transmitter surface is thin and easily rolled up like wallpaper, which means you might one day install a patch of magnetic resonance material on your wall, hang up your flat-screen TV, and finally get rid of that dangling power cord. And because there's no technical limit to the amount of power magnetic resonance can provide, you could even power large appliances like refrigerators and washing machines.

When can we expect to arrive in this promised land of wireless electricity and finally banish ourselves of power cords? Lidow said his company only deals with the core technology, so much of that is outside of his control. But he's optimistic.

“You know, I'm not in the table building business,” He said. “We make gallium nitride circuits. But we're carefully choosing partners and hopefully within a year or so we'll start seeing furniture on the market with this system already built in.”

Lidow said, as a guy with too many devices himself, he doesn't like power cords either.

“For the last several years we've been arguing about standards and formats and trying to solve what I think are fairly rudimentary technical problems,” he said. “But now we've got the solutions, and it's time to roll this damn thing out.”

WATCH: How Does Wireless Charging Work?