These Robots Merge Their Nervous Systems Into a Single Megabot

Modular robot swarms with mergeable nervous systems can autonomously combine and separate themselves to form bodies of different shapes and sizes.

A group of small robots have taken teamwork to the next level, physically connecting and merging their nervous systems to become a single megabot with one “brain.”

Researchers describe the robots and their “mergeable nervous system” in a paper published in the latest issue of Nature Communications. The technology allows for an entirely new class robots that’s as robust as a single robot with a central processing unit, but as adaptable as a group of self-assembling machines.

“The mergeable nervous system is kind of a ‘middle ware’ that allows a group of robots to coordinate in an efficient way without losing the benefits of self-organization,” co-author Marco Dorigo told Seeker.

Dorigo, a research director for the Belgian Funds for Scientific Research and a co-director of IRIDIA, the artificial intelligence lab of the Université Libre de Bruxelles, and his colleagues envision a future beyond robots that perform a specific function to one where robotic units join together to form a unique shape and size to do a particular job.

In lab experiments, the robots merged, split apart, and reconnected into a variety of shapes, each time maintaining their sensory and motor functions. They joined with robotic units that had a particular tool to perform a task — such as lift a fake brick — and were able to self-heal by removing or replacing a malfunctioning brain unit. 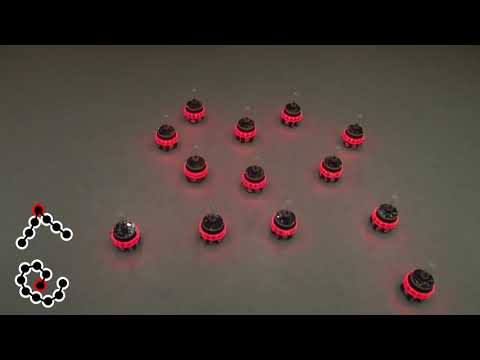 The mergeable nervous system is the best of both robotic worlds. There are robots that have a centralized controller that sends signals to other parts of the machine to control motors, move limbs or other functions. If several of these robots are working together to build a brick wall, for example, you can put one in charge of spreading mortar and one in charge of stacking bricks.

“You know who should be in charge, and you can program the computer so that the robot does what you want,” said Dorigo.

If you need to add more robots to the process, to sort bricks or mix cement, the communication between the robots becomes more complicated and information moving between them can become bottlenecked. If the brick stacker breaks down, the mortar-spreader can’t step in to complete the task unless it’s reprogrammed. The whole system can break down pretty quickly. 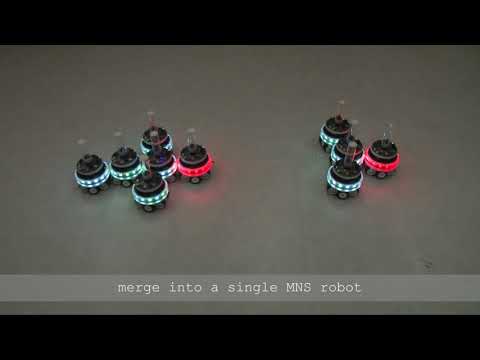 Modular robots have more flexibility, and several research groups around the world have demonstrated swarms of robots that are not controlled by a central brain, but instead each have computer programs that allow them to organize and work together. These systems are more robust. If one robot breaks down, the others can step in to do the job without needing to be reprogrammed.

But they come with their own challenges. Mainly, each robot has to be programmed so that when it works in a group, the collective executes the desired task.

“This is a very difficult thing to do,” Dorigo noted.

These new robots are essentially a swarm of modular units that communicate by Wi-Fi. When they join together, they cede control to one unit that takes over the entire organism. Any unit can become the brain, and how they cede control can occur randomly or be more directed according to the overall need.

Once connected, the brain unit issues high-level commands that propagate down the collective nervous system to the rest of the units. If a high-level command is meant for one unit specifically — say, unit F needs to pick up a brick — the robot’s own nervous system translates the command locally into the correct action. That makes programming simpler and requires less computational processing.

In this demonstration, the robots work by rolling across a floor in two dimensions, and the connections between them are rigid. Dorigo and his team would like to advance the technology to robotic units that have flexible joints and can move freely in three dimensions.