Researchers have developed powerful artificial musculature that expands and contracts in response to heat, which could better enable robot movement.

Robots from the real world lack the smooth, lifelike motions of humanoids on TV and in films. Where are the lifelike humanoids from HBO’s Westworld, AMC’s Humans, or the classic Blade Runner?

They may be coming. For the first time, scientists have created an artificial muscle that works in a way similar to natural muscle and could give robots the graceful movements of a human, along with the strength of an industrial machine.

Inspired by human muscle tissue that has the intrinsic capability of expanding and contracting, Aslan Miriyev, a postdoctoral researcher in Columbia University’s Creative Machines Lab, developed a soft, synthetic muscle that can push, pull, bend, and twist in response to heat. In lab experiments, Miriyev and his team showed that the material could expand up to 15 times more than natural muscle and was three times stronger. They also demonstrated that the synthetic muscle was capable of lifting more than 1,000 times its own weight. The findings were published in the journal Nature Communications.

Because the muscle is easy to fabricate and is made from inexpensive, environmentally safe, and biocompatible materials, it could lead to advanced developments in biomedical devices that assist people with physical impairments. It might also advance the development of surgical robots that can grip and manipulate tools or soft tissue, and it could usher in a host of new soft robots able to work safely side-by-side with humans and perform delicate and precise tasks.

“The simplest thing is picking a tomato,” said Miriyev. “If you use a conventional robot, you’ll probably end up with juice.” 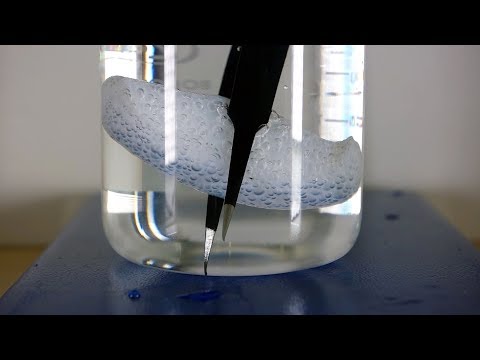 This video shows the soft composite actuator and its performance in a series of experiments.

Most advanced robots are machines made from rigid materials, like metals and plastics. Soft robots exist, but they’re typically controlled by external air compressors and pumps used to inflate balloon-like structures. Some require voltages that are ten times higher than a household electrical socket to produce a current that simulates movement in stretchy material.

“It’s a little bit scary to use — for example, if you want to put it inside a robot for childcare or elderly care,” said Miriyev.

RELATED: These Robots Merge Their Nervous Systems Into a Single Megabot

The material Miriyev and his colleagues developed doesn’t require outside pumps or other external equipment and requires around 10 volts to work.

To make the artificial muscle, the scientists mixed ethanol — a common ingredient used in everything from alcoholic beverages to cleaning products — with liquid silicone rubber. After mixing, microscopic bubbles of ethanol disperse throughout the rubber, and after it cures, the bubbles settle into tiny pockets within the rubber.

By embedding a very thin wire into the matrix of the rubber, the researchers were able to direct a low-voltage current through the material, heating it to 78.4 degrees Celsius (166.6 degrees Fahrenheit), the boiling temperature of ethanol. The boiling increases the volume of the ethanol bubbles — and expands the synthetic muscle.

“We managed to get a straightforward solution for a very tricky, intricate, and challenging [problem],” said Miriyev.

RELATED: The Future of Brain Surgery Might Be This Automated Drill

Miriyev said that he and his colleagues want to turn the muscle into a sensor so a computer can monitor how much the muscle has moved and even use machine learning to predict how much it needs to move to pick a tomato, for example.

“Then,” he said, “we can say we have a really smart, soft robot, and we don’t need ourselves in the loop.”

WATCH: This Country Is Leading the Robot Revolution