While prostheses have long been used to replace missing body parts, artist Dani Clode has developed a prosthetic thumb that is meant to augment ability.

The earliest recorded case of a prosthetic limb dates back some 5,000 years to the Indian warrior queen Vishpala, who, according to ancient Sanskrit texts, returned to the battlefield after an injury by strapping on an iron leg.

Since then, prosthesis has been primarily about replacing body parts lost due to trauma or disease.

But it doesn’t have to be. Artist Dani Clode says prosthesis could be about exploring completely new types of body functionality.

To that end, Clode recently debuted a prosthetic “Third Thumb” that gives the wearer new ways to grip a baseball, squeeze toothpaste, shake hands, or strum difficult-to-reach chords on the guitar.

“The Third Thumb aims to challenge the perception of prosthetics,” Clode said in an email. “By extending the body, I see it creating a similar trajectory for prosthetics as glasses or plastic surgery. When we reframe prosthetics as extensions, then we start to shift the focus from ‘fixing’ disability, to extending ability.”

The Third Thumb straps on to your hand and connects to a set of two small engines motors strapped on at the wrist. These motors allow the thumb to both grip and pivot.

The user controls the thumb using pressure sensors embedded inside their shoes. These connect via Bluetooth to the wrist-motors, which in turn move the thumb using a wire-system analogous to brakes on a bicycle.

“The pressure sensors allow you to have a lot of control over the thumb, as they are variable resistors, so they respond well to varying amounts of pressure as well as speed, which translate well to the thumb,” Clode said.

The appendage itself is 3D-printed from a tough-but-flexible filament called NinjaFlex.

“One of the biggest challenges has been finding the right material to create my flexible thumb designs,” Clode said. “After a lot of research I came across NinjaFlex.”

Using your feet to control a thumb might sound difficult to manage, but Clode points out that people use their hands and feet together all the time in everyday life — for example, when driving a car, using a sewing machine, or playing a piano.

Clode, originally from New Zealand, lives in London and recently graduated from the UK’s Royal College of Art with a master’s degree in design products. Previously she studied industrial design at Victoria University in Wellington, New Zealand. 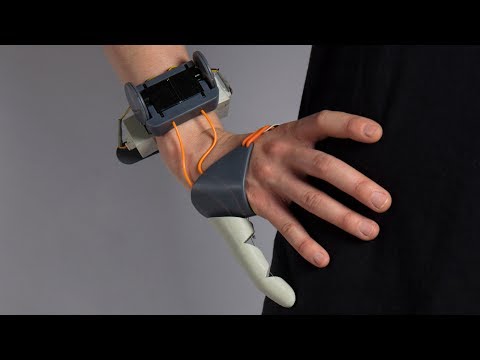