Many alloys cannot be used in 3D printing because they tend to crack from the quick melting and cooling phases, but researchers may now have a solution.

Metals have not yet reached their 3D-printing potential. Of the more than 5,500 alloys used in manufacturing today, many cannot undergo the laser-based melting and quick cooling times without cracking or other defects.

Now researchers at HRL Laboratories, in Malibu, California have figured out that adding nanoparticles to the mix could prevent 3D-printed metals from cracking. Bringing metals into the additive manufacturing arena could lead to innovations in industries from aerospace to biomedicine by improving on conventional casting methods. Using 3D printing also allows products to be customized in a short period of time, making them available for sale more quickly.

“What we’re hoping to do is remove one of the constraints,” John Martin, a researcher at HRL Labs, told Seeker. “If you don’t have to worry about whether the material is going to be strong enough once you produce a part, you can focus on the next step, which is opening up the ideas of young engineers, who are thinking about brand new [design] geometries.”

In lab experiments the researchers 3D-printed two different kinds of aluminum alloys that not only didn’t crack, but were as strong as steel and one-third the weight. Martin and his colleagues published their research findings in the journal Nature. 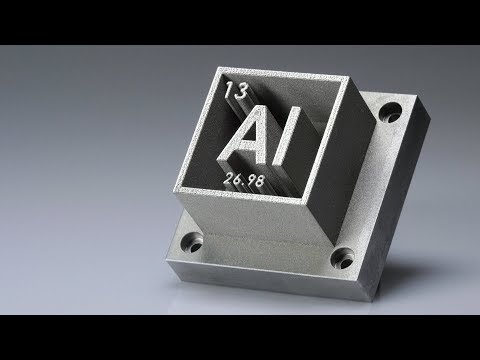 Martin, who has studied metallurgy, knew the problem was at the atomic level. Metals are crystals and their atoms line up in repeating patterns that make up grains. There are sometimes defects at the boundaries where grains meet up and those defects can cause cracks.

There was also the issue of powdered metal. The process of 3D-printing metal requires that the metal begins as a powder, which is laid down in very thin layers, each one heated with a laser in order to melt it. The molten metal must cool quickly before the next layer of powder is added and laser-heated. The intense heating and quick cooling causes metal grains to solidify in odd shapes, which can lead to cracks.

RELATED: Computerized Fabric Could Transform Any Piece of Clothing Into a Fitness Tracker

Because the grains of powder are tiny and measured in microns, Martin and his team thought they could introduce nanosized particles to beef up the metal’s strength. They used a computer program to sort through and analyze more than 4,500 different alloy and nanoparticle combinations to see which ones had atomic structures that would fit together best. The idea was that the grains of metal would glom onto the tiny nanoparticles, sort of like a water vapor droplet that nucleates around a particle of dust to create a drop of rain.

They found that a nanoparticle made of hydrogen-stabilized zirconium would work best with two different kinds of aluminum alloys. During the very first lab experiment, they laid down a thin powdery layer of metal microparticles coated with a very fine layer of nanoparticles before running the laser over it. Layer after layer, the printer created the object until it was finished.

When it was completed, the scientists cut the object in half, then polished it. There were no cracks.

“I was surprised that it worked the first time,” said Martin. “We followed physics, so I wasn’t too shocked that it worked, but it’s easy to write something down on a piece of paper. It’s much harder to follow through.”

It worked, said Martin, because as soon as the liquid metal reached the point where it should solidify into grains, they immediately nucleated around the nanoparticles. That produced uniform cooling and created a fine grain structure that prevented cracking.

Martin and his team think the technology could be adapted to other alloys used for high-temperature applications, such as turbine blades for jets and even hypersonic vehicles.

WATCH: What the Heck Is 3D Printing?