The brightest light ever produced can be used to change the way light scatters, which could improve our understanding of the universe — or the quality of airport baggage screenings.

Researchers at the University of Nebraska-Lincoln have generated the brightest light ever produced on Earth, and it may change the way we look at the universe – quite literally.

Donald Umstadter, head of the university's Extreme Light Laboratory, worked with colleagues in physics and astronomy to design an experiment in which pulses of light one billion times brighter than the surface of the sun were shot into an extremely tiny space. To facilitate the experiment, the research team fired up the lab's Diocles Laser, a room-sized assembly of optical equipment that can reach a peak power output greater than all the world's power plants combined.

The trick is that the laser produces bursts of light that only last a tiny fraction of a second.

By aiming the laser bursts at an intersecting stream of electrons, with precision down to a millionth of a meter, the researchers were able to observe how photons behave when striking a single electron.

It turns out that, at this level of brightness, the photons misbehave rather spectacularly. The high-energy illumination essentially knocks the electrons out of their usual alignment, scattering light in a fundamentally different way. The impact rattles the electrons into a figure-eight “quiver” pattern, shooting off additional photons at different angles, shapes, and wavelengths. The phenomenon, mathematically predicted in various theories, had never before been confirmed in the laboratory.

The team's research was funded by the US Air Force, US Department of Energy, the Department of Homeland Security's Domestic Nuclear Detection Office, and US and Chinese national science foundations. Thee findings are published in the journal Nature Photonics. 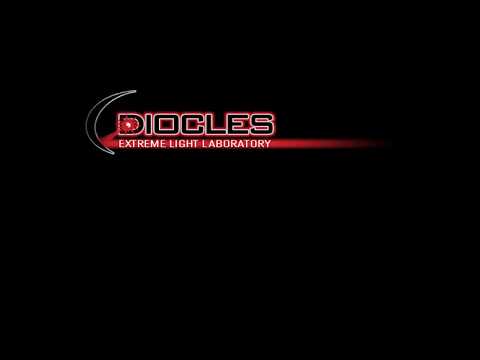 The really interesting part, Umstadter said, is that the scattering of photons can actually change the way we perceive illuminated objects. Under normal conditions, when light is increased, the perceived object looks brighter, but otherwise appears the same as in lower-light conditions.

Under the ultra-bright light of the Diocles laser, however, scientists can actually see things that are otherwise invisible to the human eye.

“It is amazing,” Umstadter said. “The light's coming off at different angles, with different colors, depending on how bright it is. What it reveals for the first time is the motion of electrons oscillating in the light fields at nearly the speed of light. They oscillate in a different pattern than they do in normal light.”

RELATED: ‘Liquid Light’ Can Bend Around Objects in a Frictionless Flow

As a practical matter, the new technique can generate three-dimensional images with unprecedented resolution and accuracy. The additional photons ejected from the illuminated electrons act like super-powered X-rays. Doctors could use this kind of imaging to spot tumors or microfractures that would otherwise be missed by standard X-ray machines.

The technology can also be used to map circuitry on the molecular level, which will be useful for manufacturers who are increasingly building semiconductors on the nanoscopic scale. The super x-ray properties could also be used at airport security checkpoints, to make sure that that laptop computer is really a laptop computer.

“The higher X-ray energies we produce can be used to see through thickly shielded materials, nearly a meter thickness of steel, for cargo inspection, or non-destructive testing and evaluation of critical components,” Umstadter said.

On a more cosmic level, the findings will help astronomers, too. Members of the research team included astrophysics experts from the University of Nebraska-Lincoln and Shanghai Jiao Tong University in China.

“Scattering of super-bright light also occurs naturally out in the cosmos, during supernova explosions of massive stars,” Umstadter said. “We can now study this fundamental phenomenon here on Earth in our laboratory.”

WATCH: Giant Space Lasers Will Hunt for Ripples in Spacetime