The microhousing startup Kasita makes modular homes that are packed with high technology and designed to be durable, affordable, and mobile.

Inspiration can come from strange places. The microwave oven was born from tinkering with radar transmitters. The principle behind the sewing machine was revealed in a dream. We all know about Newton and that apple.

For Jeff Wilson, his idea to transform housing came from living in a dumpster for a year.

In 2014, Wilson — then a professor of environmental studies at Huston-Tillotson University in Austin, Texas — began an educational experiment called the Dumpster Project that was designed to test the limits of minimalism and radical simplification. For a full year, Wilson moved into a 33-square-foot dumpster on the grounds of the university. Though the dumpster was cleaned up and tricked out (an AC unit proved necessary), it was still a pretty tight spot for a working professor and departmental dean. Surprisingly, Wilson found that he loved the freedom such radical downsizing afforded.

The dumpster experience led Wilson to develop Kasita, a mobile microhousing startup named after the Spanish word for a little house. In the two years since its founding, Wilson’s venture has quickly gained remarkable momentum in the world of housing innovation.

Kasita makes modular, 320-square-foot homes that are packed with high technology and designed to be durable, affordable, and mobile. The company’s homes are built in a factory, delivered by flatbed truck, and can be plopped into those urban nooks and crannies that larger property developers don't want. By partnering with artists and industrial designers instead of traditional architects and engineers, Wilson has created a living space informed by the ethics of elegant product design — an iPhone you can live in.

The first homes being manufactured with be delivered locally in Texas in June, then Kasita will start filling orders for them outside of Texas on a state-by-state basis. 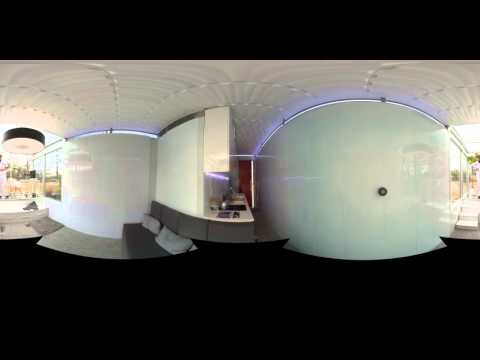 Technically, Kasita homes fall into the existing architectural designation known as prefabricated micro housing. But the differences are in the details. They can be vertically stacked in small lots, individually dropped into tiny backyards, or even hoisted onto the rooftops of commercial buildings. The inside of a Kasita house has everything you need — bedroom, kitchen, bathroom, smart appliances — with tricky modular design flourishes that maximize space. Dynamic glass windows turn opaque for privacy, couches transform into beds, all triggered by voice control.

By combining elements of the high-end mobile home with the ethics of the tiny house movement, Wilson and his team of designers have found a weird little niche that could genuinely revolutionize how we think about housing, particularly in densely packed urban areas. With a base price of $139,000, Kasita homes offer an option that simply hasn't existed in American cities in decades — a truly affordable way to live in otherwise unaffordable place.

“We ended up with something that I refer to as an integrated product that also happens to be a home,” Wilson remarked during a conversation about his vision for Kasita and the future of urban housing as he trekked from home to office in his Austin neighborhood.

How did your year in the dumpster inform the concept of Kasita?
The dumpster project started off as an educational environmental experiment to see if we could get to one percent of the consumption of a normal American home — electricity and water — and, ironically enough, to produce one percent of the trash the average household produces. So the idea was to trick it out from a raw, used dumpster into a real tiny home. And a couple of things happened in that process.

One of them was, surprisingly, I was happier in a lot of ways in 33 square feet than I had been in 3,000 square feet. When you're in that small a space, you necessarily have less stuff. So you begin to own your stuff rather than it owing you. I went from probably 40 or 50 shirts down to four or five.  There was a lot of stuff I just had to get rid of. The other thing that happened is I became much more intimate with the city. The city really became my living room and my backyard.

The third thing is I got some more affordability by moving into a smaller unit. Obviously, your rent gets lower in a dumpster. That afforded me the ability to travel more, to take my parents out to dinner. Or you could spend some of that income on paying down student debt. Just enjoying things.

That was all very surprising. It made me think that maybe there's a way to change housing and design it so that smaller works. The big realization is that the way we design and build housing is really broken.

What were your first moves once you had the Kasita concept?
We started out working with architects and traditional engineers and interior designers to try to figure out how to make a small space work like we wanted, and we couldn't make it happen. So I said, let's stop treating this home like a house. Let's treat it like a product. The big leap was to get rid of all the traditional trades and go out and find a product designer.

I found a guy out on the West Coast and I asked him to make me a product I could live in — like an iPhone I could live in. He had never designed a house before. He had designed cars and bicycles, even the shapes of chocolate bars. He went to work thinking about user experience, thinking about how to integrate technology and manufacture it at a low cost.

Now we have a team of product designers and folks from nontraditional areas, in regard to housing. Out of our 22 people, we have only six that have any experience with housing or development or real estate. We have people who build cars, who are used to rolling one off the line every 57 seconds. People who build helicopters, worked for Google, shot videos for MTV. We're bringing all kinds of people into this from a variety of fields.

The dumpster project was a crazy out-there experiment that generated awareness about trying things different in this oldest and, I would say, last-to-innovate market of housing.

What determines when and where Kasita homes will be available?
A number of factors. It depends on the density of orders we get from a particular area. Also, the order in which folks pay. It also depends on the distance from our one existing factory in Austin. We plan on building more.

You know, the other thing around housing in that it's not actually very scalable. I was just talking to these people in Europe that are building traditional small homes and they said they planned to build 450 units by 2021. Well, we can build 15 million cars in a year. And our houses are actually a lot easier to build than cars. So we should be able to make housing like cars, with multiple factories and a much higher rate of production.

How many houses is your company currently assembling?
We have two right now. We're still trying to figure out the manufacturing process. Right now we think we can build about 10 per month in our current facility. From there, the idea would be to either raise more money and build factories quickly, or just build the company more slowly.

Let's say I want to buy a Kasita home right now. Can you walk me through the process from the buyer's perspective?
Right now, you would need to have your own land. You would put down your $1,000 reservation. Then once you get your loan and put down 40 percent, we would start building. The last 40 percent would be due when we're finished building, then the last 10 percent when it's delivered. That's the payment plan.

We can probably build it within six weeks right now, from when it was ordered. That's about as fast as it would take to get your permits anyway, and we would help with that. Then it's just dropped down on a slab in your backyard or wherever. So the work that the buyer needs to is to put down some kind of foundation structure and arrange to get the utilities to the unit.

We actually have the units pre-inspected at the factory, so we save about six inspection rounds that you would normally have to get from the city. You don't need the drywall inspections, the fire inspections, plumbing, electrical. We bypass all that.

How is this different from buying a prefab house, or a trailer?
Well, a lot of it is around how folks want to live, and around the permitting. With a typical tiny home or a trailer home or anything on wheels, you can't legally live in it as a home in most places. That's why you don't see trailer homes in neighborhoods, right? You see them in trailer parks. That's because that trailer park is specifically zoned for that. But with Kasita, it's permitted and designed to fit into backyards or small properties all over the city.

Even on a rooftop?
Yeah, you could. In fact, we're actually working with owners of a restaurant here in Austin. They're at their restaurant all the time anyway, so we're working on a couple of rooftop units.

You've mentioned that people can't afford to live in the cities that they love anymore. We used to live in San Francisco, and had to move because we just could not afford living there.
Yeah, so I call it affordability through innovation, rather than affordability through just making things cheaply. Because we've found that making cheap housing doesn't solve the problem. There are larger issues here.

We're working with these principles at Kasita. We can build fast, we can erect the structures fast, we can disassemble them fast, and we can fit into very small spaces that nobody wants. We've identified 1,100 of these spaces in and around New York City. We've found over 3,000 in Austin. They're too small for any traditional developer to want. On 1,000 square feet, we can build eight units. Which is crazy, right? We're not talking about building massive 800-unit skyscrapers, we're taking abut fitting into the cracks and tiny spaces nobody else wants to use.

You think about all kinds of options. I've met with the mayor of San Jose, California, and the superintendent of one of the school systems. They're talking about allowing teachers to buy Kasitas, where their mortgage payments would be $800 a month. They'd park their Kasitas on school district land.

A teacher starting out in San Jose makes $50,000 a year. But the housing in San Jose is in the high $2,000s to rent. How can they ever attract and afford teachers? So the idea is to let them live in Kasita units while they're teaching at the schools. It helps everybody. It helps the teachers afford San Jose, it helps the school board attract teachers, and it helps the students because their teachers aren't exhausted from having to commute two hours every day. That's how we're looking at it – affordability through innovation.

By doing these experiential, radical personal science experiments like the dumpster project, you can sometimes find these unexpected things. Sometimes the hypothesis you're aiming for, you don't hit it, but you find something else much more interesting. A lot of the great discoveries in history were made by scientists finding things where they weren't looking.

You need to be out on the edges of innovation and experimentation to find those interesting things. In this case, a little dumpster and a science learning experiment may unexpectedly lead to a solution for these housing problems that have been around forever. That's the idea.