The DroneSentinel scans the sky for drones while the DroneCannon jams the frequencies used to control them.

Over the last several years, you may have seen news reports about drones behaving badly. Not those military drones deployed in combat scenarios — that's a whole different story — but rather commercial hobby drones being deployed for nefarious purposes.

Commercially available drones have been used to smuggle drugs and weapons into prisons or to airlift contraband over international borders. At public rallies and sporting events, drones flying overhead have spooked crowds and scrambled security personnel. Nudist beaches have reported problems with voyeur drones, and some cities have even had issues with peeping-Tom drones hovering around upper-story apartment windows. That's not even counting the countless episodes of drones buzzing airports, federal installations, the White House, and the Eiffel Tower.

Clearly, drones are becoming a problem. The good news is that there are several anti-drone technologies on the market, including flying nets and the rather obvious solution — available in a wide range of calibers. The bad news is that the most effective anti-drone technology — signal jamming — is largely unavailable to private individuals and companies. In the United States and many other countries, jammers can only be deployed by government agencies and the military.

Amid those market restrictions, the Australian company DroneShield announced last week that it's taking orders for a new drone detection and signal jamming system.

First, the DroneSentinel scans the skies around a designated area for drone intrusions of any kind. The system uses a combination of optical cameras, acoustic detectors, radar, and thermal scanners. It's designed to be mobile and modular so security teams can set up they technology at public events or one-off gatherings. The company has already deployed early versions of the DroneSentinel at the Boston Marathon and the World Economic Forum in Davos, Switzerland.

“We believe it's the most advanced anti-drone systems on the market,” said DroneShield CEO Oleg Vornik. “We are not aware of any system which includes a comparable sensor suite.”

DroneSentinel is just a detection system, however. It can alert officials when and where a drone is flying over restricted space, but it has no countermeasure abilities of its own. That's where the DroneCannon comes in.

The DroneCannon is an array of signal-jamming devices that builds upon the company's existing point-and-shoot technology, the DroneGun. Appearing like some kind of space-age energy weapon, the DroneGun has a range of 2 kilometers, according to the company. The DroneCannon basically clusters several DroneGun units together, then patches them into the DroneSentinel detection system.

“DroneSentry has the same configurations available as DroneSentinel but adds the jamming capabilities,” said company sales representative James White. “The DroneCannon can be automated or can be configured to fire manually. But it does not traverse like a turret would. Rather, a set number of DroneCannons are used based on how much coverage is needed.”

RELATED: Officials Scramble to Clamp Down on Drone Use in Prison Smuggling

Each DroneCannon covers a 90-degree area, so four DroneCannons cover 360 degrees, White said. Specifics on how the technology works are under wraps, but essentially the device jams all incoming and outgoing radio frequency signals, including GPS and video feeds.

“Once the drone loses signal it will revert to its programming and perform whatever the protocol for that drone is,” White said. “If it is just the radio frequency signal that is jammed then most of the time the drone will return to where it was launched. If the GPS signal is jammed then most drones will land on the spot in a controlled manner.”

The company has been selling individual DroneGuns for about six months for government and military use. The company plans to start selling the new integrated DroneSentry later this year, but again their customer base will be limited — in the US, anyway.

“DroneSentry is primarily oriented towards users who can jam — military and federal agencies,” Vornik said.

The cost of a DroneSentry system ranges from the low 100 thousands up to over $1 million.

It's a serious price tag, but White said there are still plenty of potential customers, including military bases both at home and abroad, border patrol agencies, jails and prisons, airports, embassies, and ship security. The system could also be sold overseas or even out at sea — one potential market is VIPs looking for drone security on yachts and other big ships.

In any case, the detection-only version of the technology — the DroneSentinel — can be purchased by anyone who wants to detect and track drones over a given piece of real estate. You just don't get the jammer capabilities. How you handle the drone situation after that is entirely up you. Some law enforcement agencies are already thinking outside the box on this matter. In Europe, local police groups are training eagles and other avian raptors to attack drones on command. 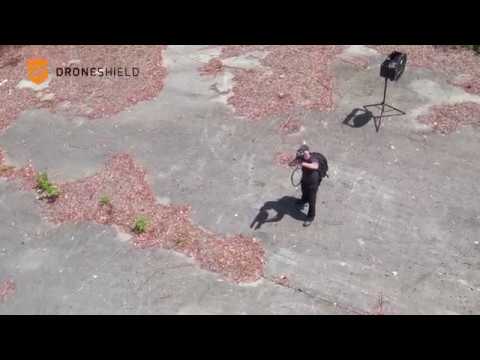